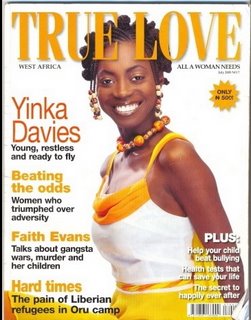 The three producers of TOO MUCH BEAUTIFUL WOMAN sit on the balcony with Yinka Davies – the erstwhile “Erykah Badu of Nigeria” – drinking sodas and looking over the late-evening Lagos bustle.

Yinka looks at the producers and smiles. Denis smiles. Koko smiles. Nana sports an especially wide and goofy grin as he tries not to stare at the soul diva’s ample breasts.

YINKA: So… Everybody is smiling. But why are we here?

Six expectant eyes turn to Nana, who takes a sip of his drink and clears his throat.

NANA: Well, I… um, I’ve been thinking about you since 5 o’clock this morning. I was lying on the floor this morning, all by myself in the dark, just watching TV… And you appeared onscreen and it… it was like you were speaking to me, telling me that I… I just had to find you. It was like a vision, you know? At 5 o’clock in the morning, I just knew that I had to see you tonight.

Koko’s eyes are closed; he rubs his temples in exasperation. Denis and Yinka still smile, but somewhat uncomfortably.

DENIS (to Nana): Could you say that again… but make it sound a little less stalkerish this time?

Remember that time in “Entourage” when cocky, eccentric genius director Billy Walsh freaked out before the first screening of Queen’s Boulevard?

Then he hijacks the film, locks himself up with it in a hotel room, obsessively edits it over and over and issues the Zen-like proclamation that he doesn’t care if it’s ever released or if anybody ever sees it as long as he knows in his soul that he has created something perfect.

That’s kinda where I’m at right now. Kinda. I ain’t hacked off my hair, though.

I can’t sleep at night. I can’t eat in the daytime. I go to the bathroom like 50 times a day. I’m moody, sullen and withdrawn (at this point, one or two of my exes hiss “What else is new?”). I take long walks before anybody else wakes up. I compulsively listen to 1960s girl-group records like “Jimmy Mack,” “Out in the Streets,” “Leader of the Pack” and “I’d Much Rather Be With the Girls.” I watch and re-watch the 13 hours of footage we’ve shot so far like it were the effing Zapruder film. At this point, I’m pretty sure Denis and Koko wouldn’t mind making TOO MUCH BEAUTIFUL WOMAN a posthumous release for me.

We’ve shot some good stuff; I know this intuitively, and pretty much all of the innocent bystanders I have abducted and forced to view the footage confirm that it looks great. But when I look at the screen all I see is the compromises, the faux pas, the fuckups. Every frame taunts me with its imperfection.

It’s ridiculous to try to judge the final quality of a film from about half of the raw footage but I can’t help it… I can’t reconcile myself to the fact that what I see on the screen is not an exact realization of what I saw in my head when I wrote it.

But I know that’s kinda silly, too… Unless you’re Hitchcock or maybe the Coen Brothers, chances are that what you end up shooting will never be exactly what you planned. Film is a collaborative art… There’s way too many other people contributing their input for your vision to remain that pure.

Still, there’s at least two major scenes that I think are complete garbage. Mind you, these are scenes that we were all incredibly proud of three weeks ago… Every time we watched them, we hi-fived each other, basking in the certainty that we were creating something very special… Something great. Today, I announce that I want to shitcan them.

Koko doesn’t say anything for a long time; he just stares at me for a long, long time with that gimlet-like gaze of his. And I can see the SCUD missiles being primed in those eyes. Then, finally:

“So… Will it make you happy to reshoot those scenes from scratch?”

“Why do you ask? Are you gonna let me reshoot them?”

I recoil from those three words like an acid-coated bitchslap.

On the real, I haven’t necessarily thought of it as my movie for a long time. I kinda gave up on that notion since the sign incident on the first day of shooting.* Since then, if anything, I think of it more of as our movie. 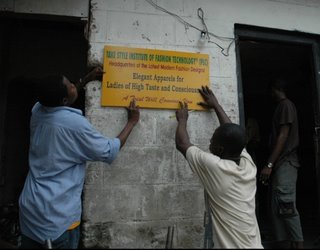 And now this dude wants to dump this mess in my lap?

But it's true, though... It's my name that everybody associates with this thing... and if it sucks, then I suck.

Damn... I wanna hack off all my hair right now.

So I'm lying on the floor at 5 o'clock this morning, watching music videos. Nigerian music vids have gotten pretty good of late... Back in the day, most videos had a budget of like 17 bucks and the production values of the average bar mitzvah video. But since the introduction of MTV Base Africa and the resultant opportunity for local acts to gain unprecendented international attention, cats have stepped their game up considerably on some Hype Williams shit.

Maybe I can get into the music video game if I flop as a movie director... Become the Nigerian Michel Gondry or something...

These are the thoughts I am thinking when Yinka Davies' video comes on at 5 o'clock. The song has some long-ass Yoruba title that I can't spell or pronounce, but it features her wearing a white gown, floating through the urban jungle of Lagos like Mama Yemanja with her healing waters.

Hi, i was looking over your blog and didn't
quite find what I was looking for. I'm looking for
different ways to earn money... I did find this though...
a place where you can make some nice extra cash secret shopping.
I made over $900 last month having fun!
make extra money

sometimes you just have to deal with imperfection and move on to the next project man. It'll never look exactly the way it seems in your head. and that's ok