Just decided to drop something right quick before the weekend since I haven't had time to post anything the past couple of days. Since Victor Uwaifo's name has come up quick a bit lately, I figured I'd throw up some more of his stuff and this is the only thing I have on hand right now in a ready digital format.

I bought this CD a few years ago from a street vendor in Aba, but I never actually listened to it until this morning. Having done that, I'd say that "Greatest Hits" might be a slight overstatement. Don't get me wrong: it's got some great tunes (as well as some miserable dreck from the 80s) but all in all, it's a pretty conservative compilation and not at all representative of his most accomplished and experimental work.

But then again, who's to say that "accomplished and experimental work" necessarily equals "greatest hits"? Still, I think he has a lot more popular--and better--work than what's what's collected here.

Shit... What am I doing? I'm supposed to be making you want to listen to it, aren't I? 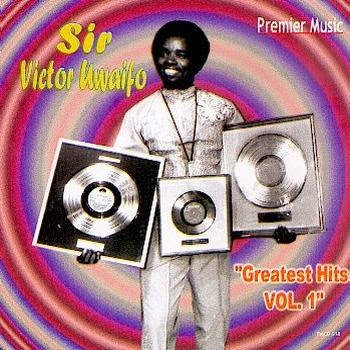 Hmmm... I'm listening to the CD again as I type this and I just realized that there's some weird skipping sound at about 5:20 on track 1, "Guitar Boy." If anybody else hears it and is bothered by it, let me know and I'll re-post that track separately. (Fortunately, it's one of his most popular songs so I've got it on a bunch of different compilations.)

Update: Here's "Guitar Boy"... I aspologize for the DivShare, but I had already uploaded this like a month ago; I think that was before Div started acting screwy, too. Anyway, I tested the link and it DLed in like 3 seconds, so we should be good.
Posted by Comb & Razor at 8/31/2007 05:39:00 AM

Really getting into my Uwaifo right now, thanks for another post of the man. Your right, Guitar Man does skip at 5.20.

nice one. I have this album as well, and mine skips during guitar boy... I don't recall the point exactly though.

okay... i'll re-post that track right now (fortunately i already uploaded it like a month ago...)

Sheesh! Considering that Premier has the rights to ALL of Uwaifo's back catalog, you'd think they'd have put a little more effort into it.

Still, there's some pretty good music here. I actually like "Joromi/Monkey Yanga" better than the original "Joromi," which was on PRL 13409.

Guitar Boy, allegedly was my favourite song, my dad is always ready with the story of how I used to dance to this song in the middle of the dance floor in parties back in the late 60's early 70's - you know, the toddler who just dont care and has to jump up and down when he hears that particular song.

song also takes me back to the journey from England to Naija via sea, back in '74 for some reason.

Enough of the nostalgia, I also have a different hits compilation called magic Fingers if you are interested.

yeah, it's obviously thrown together pretty hastily like so many Premier compilations (i didn't know they had the rights to ALL his music, though!)

i've heard Premier is putting out some pretty lovingly compiled highlife collections, though... i dunno, i'll have to see them to be sure just *how* lovinglu. most people seem to impressed that they are reissuing this old music at all, really.

funny you should prefer "Joromi/Monkey Yanga"... i was actually going to write that I wish they had included the original, *superior* "Joromi" myself!

i mean, this is a good version too, and "Monkey Yanga" is a hilarious song... but i think the solo on the old version is just... sharper somehow.

you made the journey by *sea*? now that's talking OLD SKOOL! (was Nigeria Airways even in existence by then?)

anyway, yeah... i'd love to check out that Magic Fingers. hit me up!

You know, maybe they don't. Uwaifo might have gotten back the rights at one point. What I meant was, Uwaifo has recorded for Philips/Polygram/Premier almost his whole career. Presumably all the tapes are sitting in a vault at the Premier office. Why couldn't they go through them & do a halfway decent job of it? A genuine Uwaifo "Greatest Hits" would be at least six CDs long & be great.

I agree that it's great that some of this stuff is finally being reissued, about a dozen years after it should have been.

Yeah, going by sea was real old skool. I dont know if Nigeria Airways was an option, the first time I flew was in the summer of '76. Three weeks by sea was quite an experience for a pre schooler.

Jay from India here, just visiting ... Yeah, this album is a mixed bag. The oldies & goodies (orig. 'Joromi' et al.) are all on 'Big Sound' (1969). The version of 'Guitar Boy' here is also a remake -- non-experts like me who stumble across this page looking for the original (unfortunately not on 'Big Sound' or the Soundway comp.) can find it on the 'Rough Guide to Highlife' or here on YouTube:

By the way, BIG THANKS!!! to Comb & Razor for the fantastic blog, and especially for the two 'Ekassa' albums ... real treasures!