Ofege IV: How Do You Feel

I've often wondered why this album is rarely mentioned in discussions of Ofege... I guess a lot of people just don't know it exists. But I wouldn't be surprised to find that some degree of rockist snobbery were involved; you know, the "Disco Sucks" variety, the kind that makes heads snicker at BLO's latter albums like Bulky Backside.

But such was the tide of the times; 1978 was a world away from 1973 and even in America, black bands like Funkadelic and the Ohio Players that had erstwhile purveyed raggedly funky rock were shifting their output exclusively towards slicker, more dancefloor-oriented material. As Melvin said to me, "the fuzzbox was out of fashion."

A few weeks ago, I enjoyed a brief chat with Ofege bassist Paul Alade. I found him to be a very charming and affable fellow with a markedly philosophical perspective on his days of pop stardom. He swiftly rejected the suggestion that How Do You Feel? represented the band searching for a new sound or trying to fit in, asserting that it was "just us being us."

Interestingly, Alade confirmed my earlier suspicions that the sound of the second album, Last of the Origins was a record company-mandated attempt to steer the band in a more polished, mainstream direction ("To them, we were just some stupid kids," he snorted) and recalled Higher Plane Breeze as a return to the roots, free from label manipulation. The difference in sound from their earlier recordings he attributed to the band's burgeoning maturity and changes in their musical environment.

"Right back to Try and Love," Alade explained. "if you listen to any of our records, you can hear our influences... You can tell what we were listening to at the time, whether it was Santana and jimi Hendrix, or Osibisa... Sly & the Family Stone and everything else.

"By the time you get to How Do You Feel, we're really still doing the same thing, playing our same sound, but also absorbing some of the other things that were happening at the time. Like the disco sounds you hear on the record. And reggae was a big thing happening at the time. But when you listen to songs like 'World at Peace' and 'Frustration,' that's just the basic, roots Ofege sound."

Judging from a song like "Bomp Your Booty," I'm going to guess that they were listening to Kool & the Gang and Ohio Players. Probably some Akie Deen stuff too, as evidenced by the soca-ish intro of "Check It Out," which leads into a lean, angular groove that sounds like it was ripped from Jake Sollo's late-70s playbook (as do, unfortunately, the disco hoots). Sollo himself--recently having partaken in Kiki Gyan's mutiny from Osibisa--plays lead guitar on the album. 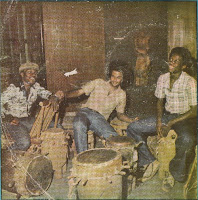 The Ofege lineup here is pared down to its core: M-Ike on drums, Paul on bass, Melvin on rhythm guitar ("Today, we probably would do everything by ourselves," Alade reflects. "But back then you needed to hire extra guys to play live").

As on Higher Plane Breeze, Robert Bailey, late of Osibisa, mans the keys; another Osibisa insurgent, Kofi Ayivor, aids on the congas; and the synth textures of Francis Monkman, last heard on Last of the Origins, are back again.

I forgot to ask Alade about the identity of "Majek," who produced the last two Ofege albums, but I must say I like the job he did on them. As much as I love the rugged stonerism of Try and Love, the Ofege songs I return to most are the more melodic groovers like "H.P.B." and this album's "Take Your Mind Away" that employ the acute guitar attack in service of fluid danceability. The title track is a sexy rub-a-dub killer, too, perfect for win'ing yuh waist pon the gyal or bwoy of your choice!

How Do You Feel does project interesting new directions for the band, but we would never discover whence those paths would lead, as after this LP, Ofege was no more.

I asked Paul Alade if they went into How Do You Feel knowing that it was going to be the final album.

"No, not at all," he replied. "We would have liked to keep going... When we were in school, we all lived in different parts of the country, but every summer we would try to get together and [record an album]. By the time of How Do You Feel, school was over, and we just went in different directions. The three of us were able to come together to make this album, but after that Ike went to school in England, and then I left to England too for a while, then to the States. And I've been here ever since."

Melvin Noks released two seldom-heard solo albums as Melvin Ukachi, Evolution (1982) and Ofege as One (1984) before packing it in.

They all admit to missing it, though, and they're all down to put the band back together... but only if they can get a fair deal this time. So if anybody out there has the wherewithal to make that happen, wouldn't it be cool to be able to write another chapter of this story in 2008?

(There's a little surface noise on this record, y'all... Especially on side B. One thing I have definitely got to do in 2008 is invest in a vacuum vinyl cleaner!)

Special thanks to Georgie Mann for spreading his good vibes

All songs composed and arranged by Ofege
Produced by Majek 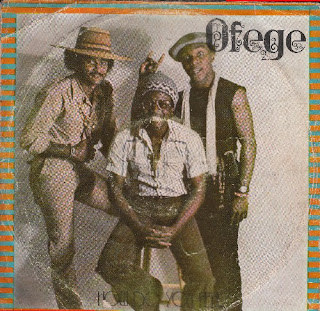 Email ThisBlogThis!Share to TwitterShare to FacebookShare to Pinterest
Labels: Back in the Day, Naija jams, Ofege

All right! Can't wait to get into this. Looking forward to the Sir Victor also...

New year greetings to you as well... I hope it's a good one for you and yours.
I can offer a cheap recommendation for cleaning vinyl: take a spray bottle and and to it add 8 oz. of rubbing alcohol with 24 oz of steam distilled water. You can spray the solution directly on the record while it's playing, but be careful not to soak the label too much. You can dry the record with cheesecloth or even a soft terry cloth (believe it or not) and it leaves no residue. I've been doing it for years now with great results, especially on the really dirty ones. I hope that that helps until you get the vacuum.

yeah, i've heard of the technique that you describe... is that more thorough than just cleaning with with commercially available cleaning fluid and brushes? because that's what i already use... but i just happen to have some records that require real deep cleaning!

It wouldn't be a good idea to apply alcohol to any old shellac '78s - you'd probably end up dissolving the surface!

But the record vacuum is definitely the way to go.

Wow indeed! First the Haastrup lp which ive been longing to hear for years, then an awesome eksassa lp and now the elusive last ofege-album! What can I say, thank you for great music and informative posts! Do keep it up! Oh, speaking about elusive discs, I just saw that "Anything you sow" from William Onyeabor on ebay..didnt even know that it existed..i have atomic bomb and tomorrow..have you got any clue regarding his discography?

thanks for checking in, tubeworms!

funny you should mention that William Onyeabor LP... i was talking about him week before last with the fellow who put it up on eBay and i was planning to post that album here myself pretty soon!

those are the only 3 Onyeabor albums i'm familiar with, though i believe he has others.

yeah, i'm always pretty cautious about using alcohol on vinyl although there are recipes that call for you to dilute it. i've heard of the PhotoFlo-based formula too, though i've never tried it.

at the end of the day, i'm just gonna have to get a machine because i get so tired of manual cleaning anyway... takes a helluva lot of time!

Thanks for more Ofege. Definitely my favorite group that you've posted on.

Ofege occupies a special place in my heart too, Kristopher... i wish they had more albums for me to share!

I'm looking forward to hearing this, thanks.
Just for the record (sic) how is Ofege pronounced? having only ever seen it written down I don't really know whether it's Off - fee - jee, or Off - egg - gay, or what. . . ??
thanks,
Jon the clueless one

oy! where's this stuff gone! I was sooooo looking forward to listening but it's gone 404 on me. LOL. Do you have the whole album(s) compressed as a archive (zip/rar) to ease the download process?