Some African electro from Dizzy K.

Earlier today in the comments for the last post, Birdseed enquired about Nigerian synth and electro music and I pledged to get some up soon. I was in the process of uploading some William Onyeabor (who I used to call "the Nigerian Thomas Dolby") when I accidentally deleted the file, but then I remembered that I really have never posted any Dizzy K music on this blog... which is crazy, because that negro was rocking my world in the 1980s.

This track from 1984's Sweet Music is a fine exemplar of the aesthetic of which I speak. 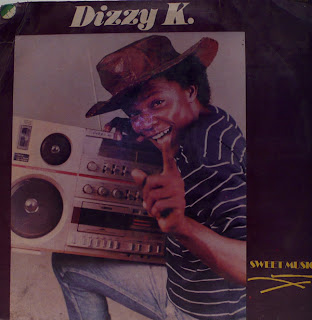 Email ThisBlogThis!Share to TwitterShare to FacebookShare to Pinterest
Labels: Back in the Day, Dizzy K, Naija jams

Another great discoey track. I honestly must laud you for spreading this kind of music, not just because it's good (it's excellent!) but because it's so hard to get hold of anything from this period. The 70s-styled material is very widely popular and well-researched in the western world, and the music that comes out today producers themselves can put up, but there's this gap in the eighties where it's very hard to get hold of good of-its-time African music from, and I've certainly tried! I spent a week of futile web searches for my now defunct student radio show once, and found barely anything besides a whole bunch of South African bubblegum.

This is the beauty of the internet - direct communication with someone who has insight into a local music scene I otherwise have no realistic method of contact with.

yes... the Internet is a wonderful thing indeed!

i'll be putting up more 80s stuff in the coming weeks, i think... especially since that's the era in which i actually came of age.

Yes Dude,
This song is great, but you know that you have to come back soon to this William attempt ;) You'll make me more than an happy men !
Sea U
Vinzz

Appreciated - U, you still on OKP? Hope and trust all is well. Peter.

Peter, where ya been? i've tried to holler at you for ages!

(nah, i don't really mess with OKP too much these days)

Got a current e-mail I need to take note of (unsure of which one to use)? Been keeping a really low profile; haven't been on OKP in over 3 years so was wondering the best means to get in touch again. Just ordered the new Shelby Lynne album of Dusty's Memphis material on the basis of Fred Dellar's review in Mojo; hope it's as good as he makes it sound - you ought to check out BBC Radio 2's documentary on Redneck Music (hosted by Mark Lamarr) if you haven't as of yet; good archival knowledge there. Be in touch soon. Looking forward to an Edward Yang retrospective as well.

combrazor (at) yahoo dot com, just like it's always been.

do you still use your gmail? i tried sending you some messages there about a year ago, but got no response.

y'know, i was thinking of checking out that new Shelby Lynne myself... i've been a fan ever since the I Am... album and pairing her up with Dusty's songs just seemed inevitable!

we gotta talk soon, though... 'bout a lot of stuff, but especially movies! (i've only recently started re-immersing myself in cinema culture again after more than a year away)

Check your e-mail - we'll catch up there.

WOW is that good. Your blog is going to drive me both crazy and broke thanks to all the obscure rare grooves it's got me tracking down.

All the finds are good but this track especially grabbed me.

always nice to see you around, T.!

yeah, you could definitely go broke trying to track down some of this stuff, since a lot of it can probably only be found on eBay for criminally exploitive prices...

this is great, i want the title track sweet music.it was a massive hit in ghana

Thanx, i am playing this song now at the office and we are remembering our school days way back in '84. you are da bomb .thanx again

i don't have the Winston Soso song you're looking for, but i can probably find it from my Bajan peeps.

the "Bajan Yankee" song... is that by Grynner?

Honestly i cant remember..but the chorus goes like"bajan yankee come on and shake your body",
will appreciate it very much if you able to get the winston soso song..your blog is wonderful, i was just reading the filla on sonny okusun's help and i had been searching for that song for ages....thanks again

still waiting for the bajan yankee song.it is possible it can be by grynner.also the winston soso

yeah, i'm still on the case!

Interestingly enough, I just discovered that blog by chance this morning!

Is that your blog? Pretty good stuff, but I wish you would give me credit when you borrow content from over here!