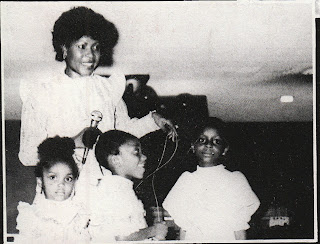 When I was around nine years old, I nursed a simmering schoolboy crush on Martha Ulaeto, who was a rather popular singer in Calabar. She was a local girl who had achieved considerable heights as one of the few trained operatic singers in Nigeria at the time, and her primary repertoire comprised jazzed-up arrangements of traditional songs drawn from the area's folklore. As such, the people of what was then called Cross River State took much pride in her large-scale projection of their culture and she was a mainstay on Calabar's Cross River Radio and NTA Channel 9. I remember seeing her on TV singing "Everlasting" and "Ije Lovu" surrounded by a bunch of dancing kids, looking like a sexy music teacher. I begged my mom to buy me a music magazine that had an article about her in it (I can't remember what the magazine was called but I do recall that the cover of that particular issue featured Eddy Grant wearing an uncomfortably tight pair of football shorts). Most of what I know about Martha Ulaeto came from that article:

She fostered her passion for singing in cultural arts tournaments while a student at Cornelia Connelly College, Uyo before going on to the University of Ife (now Obafemi Awolowo University) where she studied under Samuel Akpabot, singing the title role in a 1971 rendition of the redoubtable composer's Cynthia's Lament. After an appearance in Adam Fiberesima's opera Opu Jaja, she won a scholarship to the National Conservatoire in Athens and subsequent voice training in London. Finding few outlets for a prima donna of the opera upon returning to Nigeria, she turned to the Efik ballads, work songs and children's rhymes she had heard growing up and found success amidst the blossoming vogue for female folk singers. However, when it came time to release her first album, 1981's Love Me Now, Martha determined to prove that (as she put it in the sleeve notes) "I can also freak out."

Love Me Now was recorded in London with Akie Deen (who mostly underlayed gentle calypso-tinged production, but floored the pedal on a torrid disco scorcher or two) and released on Olu Aboderin's Skylark Records.

She swiftly followed up her debut with 1982's Everlasting, a more boogie/modern soul-flavored set featuring more original compostions. It was produced by Mike Abiola Phillips and released on Martha's own ULA label. She had a very interesting sound on this album... Singing R&B with an operatic vocal style occasionally made her sound uncannily like Miss Piggy, but it totally worked for me. Maybe because I loved The Muppet Show and the production was so damn pristine.

("Everlasting" was the song on which I first heard slap bass. Well... I mean, not really. In retrospect, I can think of a score of songs I had heard before that which are dripping with slap bass, but this was the first time I really noticed it--along with the reverb on the handclap--and went "Huh? How'd they do that?" It was probably the key moment at which I started thinking about record production and after that, I kind of sought out those kinds of sounds... That is, until I vigorously forswore them during my funk purism phase in the late 90s.)

She released two more albums on ULA between 1983 and 1985; I really can't remember if she put out anything after that, though. I believe she lives in London these days and is still involved in musical education and her great love of the opera.

Here are a couple of tracks from her first two LPs.

And Martha, if you read this, holler at your fan! 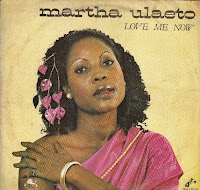 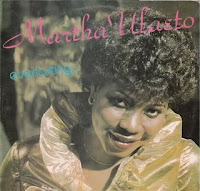 Email ThisBlogThis!Share to TwitterShare to FacebookShare to Pinterest
Labels: Back in the Day, Martha Ulaeto, Naija jams

O My God! You mean you actually knew about Martha Ulaeto? You're probably the first person alive I will meet who does. And you do have some really good information.

All I knew was that she read music at OAU, Ife. My Dad was trying to get me to appreciate classical and operatic music back then and after listening exhaustingly to his collection of Mozarts, Handels, Ella Fitzgeralds, Nat King Coles and the rest, he used to like this girl called Martha and watches her every time she comes on NTA.

My Dad was also a fan of the late Prof. Sam Akpabot both in the musical and football sense. I guess thats how he got to know Martha.

The only song of hers I knew was African Life (or was it African Night?). I think it became the theme song for a program on NTA or something. I remember she sang it with such gusto and got my father applauding the TV everytime. I guess that was when I got hooked to her myself.

And NTA always obliged us, they played it so many times. I always stand at attention in front of the TV just watching her sing. She was a beaut to watch too. It also got extensive airplay on Radio Nigeria too.

Damn! I thot I was the only one who knew about her after my Dad died. The name always drew a blank even from so called Naija music experts. Its so refreshing getting to meet someone who does know.

I also never knew she was a Calabar girl, always thot she was Ibo.

I believe she is well.

Many thanx for the info.

After listening to Nti Eweb now, I think I know why Martha was largely overlooked in Naija music.

I know this song so well but had always thot it was done by Christy Essien-Igbokwe!

I believe many people would have thot so too. Listening to it though one can notice the operatic voice as distinct from Christy Essien's canary voice.

Just had to drop that. I'm going back to listening.

believe me, i was pretty thrilled to find someone else who remembered Martha Ulaeto, as well... that hardly ever happens for me, even when talking to people who know a lot about music!

and the fact that you made your post on the same day that i made mine? the serendipity was just too much!

you know, i can see where you're coming from on the similarity to Christy Essien, because i too thought "Nti Eweb" was a Christy song back in the day.

(and it's quite understandable when you consider that that song came out in the same year as Christy's similarly-flavored Ever Liked My Person? album - and on the same label, too!)

as for the Martha song you're trying to remember... i wonder if it's "Africa Rise"?

(sorry about the slight skip in there... i ripped it in a hurry before work! i'll try to fix it later if it's a bother)

You know, I'd be lying if I said I liked most of the 80s Nigerian pop you've posted, but I'm still really grateful for the opportunity to hear it--all these things I never knew existed have given me a broader view of nigerian life than I could get from a bunch of (admittedly outstanding) funk and Afrobeat comps. So thanks.

you know... it has occurred to me that in some way, that IS kinda my tacit (maybe even sbconscious) motive behind a lot of the stuff i've been posting lately: to throw some light on the varied nature of Nigerian music - and by extension, Nigerian life. i think.

the quality of a lot of the music varies widely, too... but at the end of the day, it is what it is. and i think that it should to some degree be celebrated - or at least acknowledged - because (cliche alert) you can't know where you're going if you don't know where you've been!

thanks a lot for coming along for the ride!

Mbok, yes it is Africa Rise.

I cannot help it, this stuff brings tears to my eyes.

glad to be of service!

Martha had a great tune on the Dutch Polydor release from the '80s, "African Music." I forget the title. Thanks so much for posting these! I've always wondered about her.

I'm posting this from a hotel computer in Ithaca, NY.

heh... i was about to ask you what you were doing online, John! checking out Cornell, huh?

anyway, yeah... the song on that compilation is "Ndito Isong Emana Nyin (Children of our Land)" from Everlasting.

great compilation that, btw... always hoped they'd release a second volume. (and yes, i did pinch the photo up top from the sleeve)

I grew up listening to Martha Ulaeto's music as in late 70's in Nigeria. I actually her name just crossed my mind and I had to google to see if I could get any info on her. Indeed, Nigeria had well trained musicians unlike now. I also used to watch Sam Akpabot show "ladies and gentlemen...it's time for the Akpabot show"..... The days of Bar Beach Show with late Art Alade. Whatever happened to Nigerian music scene?? Whatever happened to the "old soldiers". South Africa still has a lot of their old generation musicians singing and training the new generation but never in Nigeria. It's a shame to see the likes of Perry Ernest, Sonny Okosun, Eric Akaeze, just fizzle out just like that.

thanks a lot for your support, and for sharing your insight, Nnebaby... hope you continue enjoying the blog!

One can hardly find anything on Martha Ulaeto these days. Thanks for putting this up. Love 'em songs. Merci.

Dear Comb & Razor
Thank you so much for posting this article. I actually met Martha Uleato last Friday at an event. I must be honest that I did not recognise her or know her by name. I am saddened that I did not on the basis that she is one of ours( a Nigerian who had done something different) To me she is one of the old school and I say that with great affection. Meeting her, talking to her and hearing about her life directly from her got me thinking how as Nigerian,s we show so little appreciation for our greats/ our people. In any other country she would have been lifted up and acknowledged so much more. It is from your article that I suddenly realise that even though I had not met her, before now, I knew her through her song Nti Eweb. I remember this song so well, because my parents played it endlessly in my childhood.
I guess for them living in London in the sixties, it was a touch of home town Calabar.

I appreciate your article so much because after meeting her I was struck by the petential loss. Nigeria is in the process of loosing its greats without setting down any archives for those coming behind to see that Nigeria is great and was known for more that just being a corrupt state.

Could you do me a favor and email me? combrazor at yahoo dot com...

I appreciate your article so much because after meeting her I was struck by the petential loss. Nigeria is in the process of loosing its greats without setting down any archives for those coming behind to see that Nigeria is great and was known for more that just being a corrupt state. london apartments for rent