Who were Sons of Izzu?

1. They were an Igbo highlife group. While they do not sing in Igbo, this is obvious due to their bouncy, Ikwokilikwo sound and the subtitle "Anambra/Imo special," a reference to the two main Igbo-speaking states in Nigeria at the time.

2. This LP was recorded some time after 1975, the year Ikenga Superstars of Africa released Ikenga in Africa, which popularized this style of hard-driving, pidgin English highlife. Probably even after Prince Nico Mbarga's 1976 Sweet Mother, whose massive success across Africa and the Caribbean thrust this kind of sound into overdrive.

3. Like Mbarga himself, this LP is a Cameroonian-Nigerian creation. The only credited session musicians are Edjo'o Jacques Racine (bass), Ginger Forcha (guitars) and Feliciano Sango (a.k.a. Felix Nsango, percussion), a trio of Cameroonian rock musicians known as Rock Town Express.

4. The record was produced by Tony Essien, a musician and producer from Akwa Ibom State who often worked with Rock Town Express, and released on Essien's own Supertone label. This record would have been made before Essien assumed the position of chief producer and creative director at Haruna Ishola's Phonodisk label in 1980.

So... Given all that, I'm guessing this record dropped in 1977 or 78 (Something about it sounds very Festac-y to me). Still no clue who Sons of Izzu themselves were, though...

SIDE TWO
3. One Big Question
4. You Never Chop Beleful 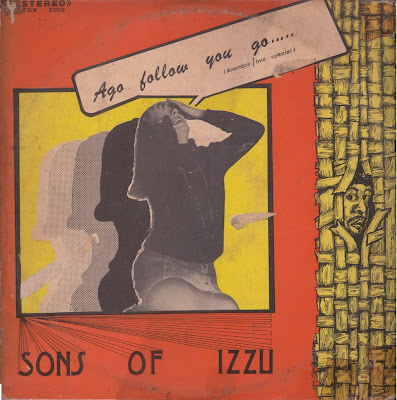 Looks very cool. Can't wait to get home and have a listen...thanks as always.

Thanks on the links to Pen & Mallet and Skin & Barrel btw...

Ain't no thing... I really like what you've got going on!

Ha, Ambrose! Somehow I would have imagined that the Onitsha pamphlets would have been a bit too lowbrow for your tastes...