Still on that Old Calabar tip...

The Calabar of my childhood was not today's affectedly quaint, glossily-packaged tourist trap but a city lost in time.

Back then, the town's strong connection to the past was not yet exploited as a marketing hook. In fact, it often seemed like an oppressive burden--weighing it down, dragging it back and keeping it perpetually out of step with the rest of the country. It was a ghost town where shadows of the glorious path were an everyday, almost suffocating presence.

I became aware of this soon after we moved into town. I was sitting in the Volvo with my dad, parked on Calabar Road while we waited for my mother who had gone up the street to Uruawatt (Watt Market, named for George Watts, the Liverpudlian merchant who helped establish Calabar as a major trading post in the 1880s). Here, in the heart of historic Old Calabar, surrounded by dusty, colonial architecture, my eye was drawn to the central post office (built in 1891, it was the oldest post office in Nigeria--and believe me, you could tell just by looking at it)--or rather, to the garish posters plastered on its outside wall. Most of them advertised the latest Bollywood and Bruceploitation extravaganzas screening at Patsol Cinema, but a couple of them were slightly faded placards that looked like they had been up for maybe a few months, announcing an upcoming performance by someone called Rex Lawson.

"He was a musician who was very popular all over Nigeria," he said. "He's dead now."

I should mention at this point that this conversation was taking place in the year 1981. But that was Old Calabar for you: trapped in a twilight zone where Rex Lawson had never died and neither had horn band ballroom highlife, despite the rest of the country having agreed that it was yesterday's news ten or thirteen years earlier.

And so a youth would hear songs from the album Ekausen by local musician Bassey Archibong played on Cross River Radio almost every morning while getting ready for school. This is another record that I pretty much note-for-note, beat-for-beat.

Of course, listening to it now I am a thousand times more appreciative of it. As I've said before, I used to think of all of this Calabar brass band stuff as "old man music," but knowing what I know now, I recognize that there is a lot more than simple nostalgia happening on this record. There is a youthful vitality that differentiates it from the elegant languor of old-timers like Inyang Henshaw and it does acknowledge various developments that occurred in music since the end of The War. Some of Archibong's guitar licks evoke the Ikwokilikwo, craze and the drums and especially the keyboards on "Nsese Owo," "Nne Nne" and title track tip their hats to Sonny Okosuns' Ozziddi beat.

(In that regard--the carrying forth of dance band highlife traditions for a new generation--the music of Calabar bore more than a slight resemblance to the Ghanaian music scene, which is probably appropriate as there were so many Ghanaians living in Calabar in those days. Until 1984 most of my friends were Kwekus, Kwabenas and Kofis.)

I wonder if they still play music like this in Calabar. I heard some performed by a youth group at Calabar's iconic Qua Iboe Church last summer, and it was quite heartwarming hearing those kids swinging to that old-timey rhythm on their horns, but I don't know how much radio play this stuff gets,

(I really wish I had gotten a photo of those Rex Lawson posters, by the way.) 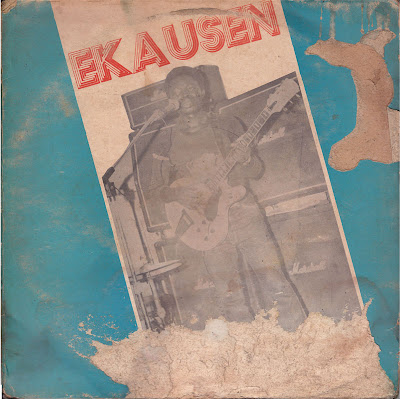 I should go to Calabar next time I'm in Nigeria. It sounds nice, tourist trap or not!

Last time I was there I was in Kano (for a day & a half) & it was a marked contrast to the South. The traffic lights actually worked and there was hot running water in my hotel! A fascinating city - wish I could have stayed there longer.

I hear Jos is the best of all.

Ha! Well, Calabar is kind like that, actually... Clean, paved streets, functional street lights, all that!

I've never really been to the North myself (not counting Abuja)... I really do want to, though. I'd really love to do some record digging around there. Hopefully soon...

This is a great blog. I'm new to highlife music. Can you recommend a good overview- a book, film, article- that puts some of what you're posting in context?

Unfortunately, I can't really recommend any definitive overview of the highlife genre--for various reasons, it seems to be little-known in the West.

Still, John Collins' Musicmakers of West Africa and West African Pop Roots have some good information on the development of highlife in Ghana and Nigeria. (He also seems to have a book called Highlife Time! which I am yet to read.)

Prof. Collins also has various articles that could be found on the Internet if you Google his name + highlife.

(Try the same thing with the name "Benson Idonije" too)

Oh yes... Also, if you can find the original Nigeria 70 compilation (*cough*) the third disc is an audio documentary that offers some good insight into the world of highlife.

Respect on your site!

Thanks, Sean... I just discovered Africa is a Country fairly recently myself!