I love it when readers send stuff in... Not just because I'm genuinely interested in other people's insights, experiences and information, but also because it relieves me of the responsibility of having to generate new content for the blog!

So today we have an essay and a mix celebrating the influence of Fela courtesy of Washington DC-based journalist Iwedi Ojinmah... Enjoy! 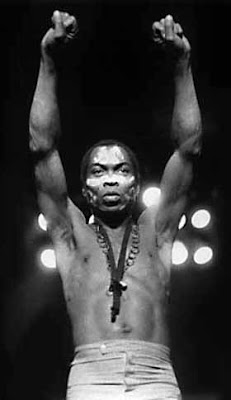 I remember seeing him for the first time just as if it was yesterday. Through the clouds of smoke and altered by the “come hither” glow of red and blue bulbs that ordained the club, he stood with relative ease…. an omnipotent symbol of a bold and angry new Africa.

I was instantly mesmerized and would be for life.


No Teacher Could Teach This Guy Nonsense

He was bare chested and seemed oblivious to the thin film of sweat that defied the cool wind being dispersed by huge ceiling fans above and that covered his sinewy ebony frame. One circle - in what must be some type of traditional Yoruba chalk - encircled one eye making him look more like a winking raccoon than arguably Africa’s most vibrant singer slash activist. He has now evolved into a far cry from the trumpeter of the Cool Cats aka Koola Lobitos that had once played highlife and modeled evening gear for fashion magazines.

His nostrils flare a little and his eyes sparkle with obvious intelligence as he takes one last monster drag of his cannabis cigar and turns to the crowd with his now patented call to arms of “make I yab them”? The emphatic reply is a resounding “Yab them” !!!”

Ladies and Gentlemen... the place is Ikeja. It is the late 1970s and the location is The Shrine, and Fela Anikulakpo Kuti’s famous “Yab them Night” has just kicked off.

I had picked a good night. Well, make that "we." Stowed away from High School thousands of miles away in the East, my friends and I had travelled all the way to Lagos by “Air - Chi Di Ebere” just to see “Baba” live. We, as well as the rest of Nigeria, had just been hypnotized by that first killer LP that featured both “Shakara” and “Lady” and rather than buy another pair of platform shoes, or Brutus jeans had saved our pocket money to make this hajj possible.

For the first hour it was a non stop jam session of some of his greatest work. Looking back now we can only “Thank God” that he had yet to release such great master pieces as “Water No Get Enemy” or “Africa Center of The World” because as we know Fela was not just a great performer, but a shrewd businessman and refused to play any song you could buy for yourself on wax, tape or 8 track. In as much as they were still being worked on then they were already timeless classics even in the pupa stage and “Fela” delivered them with unparalleled showmanship.

In between sets his tongue wagged like a hyperactive “bulala” as he called out everyone from President, to the Pope, flogging even his own Brother Beko who was the then equivalent of the nations Surgeon General with it, as well as a gaggle of other “useless” “Madams and Ogas”. Not in fear of the jack booted thugs in uniform that had repeatedly suffocated arguably Africa’s most vibrant Press in the past, that night Music was his Weapon as we remained in stunned silence - soaking everything in. By nights end most of us had made a conscious decision to remain either part of the disease or become part of a cure. I say this because out of the four of us that witnessed sheer magic that night 2 would end up being journalists and the other 2 lawyers.

Fela would rewrite that art of confrontation using both satire and an in your face type of challenge virtually new to Africa. This would catapult him to instant super status especially in Ghana, his old stomping ground, and in South Africa where Hugh Masekela would virtually change his new band's format and style even dedicating his maiden album entitled The Boy's Doing It to Fela himself. 60 years later his respect has not diminished one iota as we hear in his ode to Fela on the album Sixty which not just brings tears to your eyes but also tugs at your heart.

He would be the first to actually name names in his songs starting with the fabled "I.T.T." in which he questioned not just then-chairman Abiola’s dubious “modus operandi” but actually mentioned then-President Obasanjo by name. As we know this would set into motion a hateful relationship with the Nigerian Army that would not only span decades and play an unfortunate role in his Mother’s death, but also lead to his incarceration in Nigeria’s coldest and dampest prison located in Jos. In as much as his body was already being ravaged by the HIV virus, it was here that he would catch the actual pneumonia that would cause the heart failure which killed him on August the 2nd, 1997. This is made even more unfortunate when we look at the likes of, say, a Magic Johnson today, who has shown us that having AIDS does not necessarily translate into an instant death and that Fela despite being infected then could have easily lived on with today’s new drugs and given us 20 or 30 years more of sheer ecstasy.

Years later while working at The National Public Radio in Washington I would hear a nightingale-like voice emit from one of the studios and carry through the myriad of its hallways. It wasn’t so much that it was beautiful but it was what it was singing that galvanized me into an almost trot – seeking its source. Stunned I peeped in and looked at the bald head of Sinead O’Connor (then arguably the epitome of controversy and female activism) “blowing” Fela’s “Lady” in perfect pidgin. Later on I would learn that she was preparing for the Manu Dibango’s "Wakafrika" tour and all I could do was just shake my head and smile. I mean here was one of the ultimate feminists of her time singing a Fela song that without a doubt if not encourages sexism certainly winks at it, and she didn’t even know. Rather, with eyes closed, she attacked each line with such energy and passion that one despite her pigmentation, could have easily mistaken her for one of the Kalakuta Queens. Fela himself must have been proud and smiling at the fact that not only does his music continue to live on with efforts put forth by his sons, but also in projects like Red Hot + Riot and by bands like The Roots and singers like O’Connor. Bearing this in mind, he can really Rest in Peace knowing that (and I quote the NY Times) "Afro beat offers plenty of room for allies and kindred spirits, without ever surrendering its own stubborn identity."

Iwedi Ojinmah for the Times of Nigeria and The Village Square

Some of my favorites on that mix. Looking forward to it.

This is back to memory lane. But Iwedi did not say if he and his colleagues tried the cooncoction cooked at the shrine which was typical of the Chief Priest's pre-performance. It was also kind of the legend's rituals and as a first comer it becomes a learning experience. I barely made it back home my first night.

It was when I became a regular I figured the whole thing out. The stuff at the shrine was entirely different from other pubs which made the place unique.

Ambrose...haba of course I did now ! Fela was not only an amazing musician but a savvy Manager in terms of how he sold the Shrine using all aspects of what the hospitality business had to offer then in Nigeria.

5 flavours of Ice Cream , right next to palm wine (fresh and overnight), White Horse whiskey, fried Yam and Fish with pepper all beside sticks of smoldering Indian Hemp.

The variety was just mind boggling and it shows u what vision we lost with the man’s Death.

Ol' boy, I think you should stop by my hood...there's a place called Dragon Fly and it is typical of Fela's joint. Lots of fun and all that made body and soul one back in the day. It's Hollywood's finest joint because it brings all souls together. Give me a holla and we'll hook up on my tab.

I look forward to it, man!

It's been a while since I've browsed your pages. Still diggin it

Nice to see you around, Ivory!