(Consider this an unofficial companion piece to John B.'s great post on the golden age of Ghanaian highlife over at Likembe.) 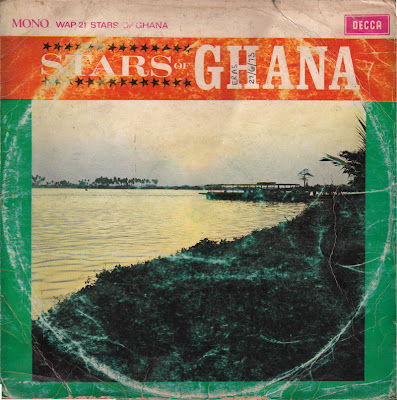 When Ghanaian trumpeter E.T. Mensah arrived in Lagos with his Tempos band in 1950, he introduced Nigerians to a brassy and vivacious new dance sound that had been developing back in Accra since the late 19th century, combining the rootsy flavor of various street rhythms of the West African coast with the urbane elegance of Western ballroom music. Highlife, they called it back in the Gold Coast.

Within a few years, all the top Nigerian ballroom orchestras had ditched their waltzes, swings, foxtrots and quicksteps and hitched their wagons to the highlife train. From that point on, highlife would develop in parallel between Ghana and Nigeria, with the Nigerians devising quite a few innovative permutations of the genre through the 1970s and 80s. Still--for this listener at least--the definitive highlife sound will always be the jaunty, opulent music plied by the Ghanaian dance bands of the 1950s and 60s.

Stars of Ghana was an influential compilation featuring a sampling of these Ghanaian bands as represented in Decca West Afrca's bestselling series of highlife recordings in the mid-to-late-60s.

The King of Highlife, E.T. Mensah with his Tempos; the Black Beats, led by the great King Bruce; the Stargazers, featuring saxophonist Teddy Osei and drummer Sol Amarfio (both of whom would go on to found Osibisa) and led by legendary trumpeter Eddie Quansah; and the Broadway Dance Band, led by Nigerian trumpeter Sammy Obot.

As much as I love the big brass brands, some of my favorite Ghanaian groups from this era were the guitar bands such as King Onyina's and Akompi's. Working with much smaller combos and without the added volume of horns, trap drums or (in some cases) even bass, they managed to approximate the voluptuous texture of the orchestras with just nimble fretwork, chromatic chording and wailing vocal harmonies.

The guitar playing on all these records is quite colorful, actually... Over the summer I was fortunate to attend a seminar on highlife at which Stan Plange of the Broadway (later Uhuru) Dance Band and guitarist Ebo Taylor both asserted that Ghana always had the best guitar players but suffered a dearth of decent trumpet players and and so always looked to Nigeria to recruit trumpeters.

One band featured here that I know nothing at all about, though, is the African Tones. Does anybody know who they were? (And while we're at it, who were The Republicans?) 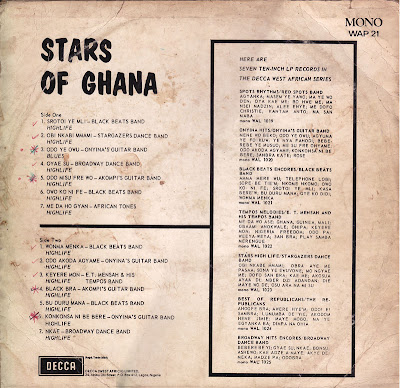 Thanks for this, Uchenna. I've been on such a Naija kick lately I'd totally forgotten about all the great Ghanaian stuff out there.

Great... I look forward to that! Lately I've been trying to get more into the post-70s Ghanaian stuff. (I'm hoping the Highlife Haven starts updating more frequently...)

No doubt, G@ttoGiallo... I love your pics!

very nice record (again)
many many thanks

Daniel, yea I can see what you probably did there. I really appreciated that part, however hehe I am not that harsh like my dad with these things. He at all times tells me crazy stories again in the day and calls me a loser. I guess it's time I move out of my dad and mom' basement LOL. Aaanyways, what about you? what does your dad think xD" Anyway, in my language, there are usually not a lot good source like this.

Hope una see as una fool reach na nigerian na fit die abi?Na God go punish una becos all d one when d other African Countries dey thief so na we Nigerians na thief am mak God punish una when una kill am so who he dey pain na,i feel say na nigerian na i kill b4 goat..he just pain me say i love lucky dube if nt who get load na carry he load na ur own broda na u kill......LONG LIFE NIGERIA AND SUCCESS TO ALL NIGERIANS LIVING OUT OF THE COUNTRY,,,,STILL ON MUGU FALL GUY MAN CHOP