And while you're at it, thank him also for this information about the Ikenga Super Stars of Africa, filched by moi from the breathtakingly thorough African Music Home Page:

The Ikenga Super Stars of Africa, led by Vincent Okoroego, a former member of Steven Osita Osadebe's Nigeria Sound Makers, were a leading Igbo "guitar highlife" group of the seventies and eighties in Nigeria. The Ikengas called their style of music "Ikwokilikwo," a word which has also been used to describe the early recordings of Oliver deCoque and Kabaka Opara of the Oriental Brothers, among others. About the meaning of this term, Fidelis N. Umeh writes, "...'Ikwokilikwo' actually has a 'vernacular' type of meaning in the Igbo language. To set it in context, take a look at a word like 'ngwo-ngwo.' Its meaning has been derived from the act of 'igwo abacha' (preparing cassava - normally in rich oily mixing bowl), 'igwo ncha' (preparing a dish called ncha with a special type of mixing bowl), etc. It has come to be used to describe any preparation which entails the act of 'preparation in a special mixing bowl.' Ikwokilikwo is derived from 'ikwo oka' (grinding corn into pulp form), 'ikwo okpa' (grinding beans and peas into pulp form) and denotes the grinding process. The type of music to which it refers is similar in vernacular to 'cooking' used in the U.S. in the 70's to refer to really 'heavy' music in rock, jazz, blues, etc."

Ikwokilikwo in the early days at least was associated with certain classes of people, particularly traders. Its hard-driving, bouncy beat was just the sort of thing to play over a market stall sound system to attract customers! The Ikengas' LP "Ikenga in Africa" was a pan-African best-seller, combining sharp Congo-style guitar work, rhythms similar to Camerounian makossa and lyrics in "broken" or "pidgin" English, which broadened its appeal across ethnic lines. Indeed, its call-and-response recitation of the countries of Africa inspired numerous imitations, including one by the Ikengas themselves! 1976's (and 1983's) "African Unity" was a rehashed version of the same tune.

Gilbert Hsiao has provided much useful information for this updated Ikengas discography that sheds light on the history of this influential group. One question which has apparently been resolved is the relationship between the "Nkengas," who issued at least two LP's, and the Ikengas. It now seems all but certain that these are one and the same group, headed by Okoroego. But this does not answer all of the questions! It has long been rumored that "Nkengas in London" was an Osita Osadebe master tape hijacked by Okoroego and other members of the Nigeria Sound Makers who defected in the early seventies. Absent any evidence to the contrary, this seems likely. "Nkengas in London" sounds not at all like other Ikengas recordings, for instance, "Ikenga in Africa." The vocals, the instrumentation, even the spoken comments at the beginning of the songs, are all classic Osadebe. For this reason, I have listed this recording in Osadebe's discography as well as this one.

The Ikengas have had numerous personnel changes and defections over the years. A significant split occured after the band won a sizeable award from the Nigerian government for their performance at FESTAC '77 in Lagos. Guitarist Aloysius Anyanwu left to join the Oriental Brothers, and subsequently had a solo career. While the Ikengas were basically an "Igbo" group, over time they took on a broader character, enlisting musicians from other ethnic groups and Cameroun. In this sense they were part of a broader movement in Nigerian music in the late seventies and early eighties that I call "Pidgin Highlife," a trend that included artists like Prince Nico Mbarga who sang mainly in "pidgin" or "broken" English rather than vernacular languages. As this genre faded away in the early eighties, so did the Ikengas. I do not know if they are still performing as a group. - John Beadle 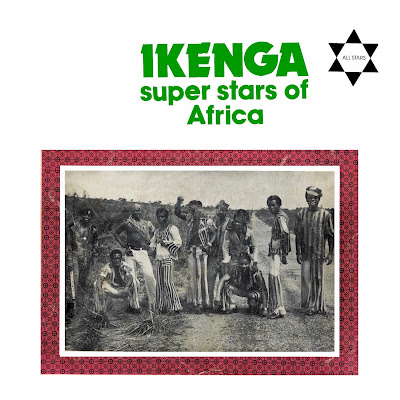 (I apologize for the slapdash nature of this post. I got a serious case of the busies tonight, and I also want to check out that new Mad Men show on AMC.)

Email ThisBlogThis!Share to TwitterShare to FacebookShare to Pinterest
Labels: Back in the Day, Ikenga Super Stars of Africa, Naija jams

Hey Guys, John and AFKAB, I haven't heard this record for about 30 years!!!!

Thanks, its instantly recognisable, I'm gonna have fun with this one, no doubt

glad to be of service, bruh... but really, ALL the credit here belongs to John!

Great post! Much thanx to you and John for passing it your way.

very good the information about this orchestra was a wonderful orchestra I have several of its Lp and of other similar rhythms of nigeria of the years 70 and 80 if to somebody but he likes this I generate musical and wants to share information with me writes me my mail it is rocky1_8@hotmail.com thank you

Hello does anyone have the lyrics and translation of the song "songs at sunset" by the groupe IKENGA? I would be very, very glad.
ibiamuro@yahoo.de

This link is no longer working. Is there any way you can re-upload it or get John to do it? If so, thanks!

the link works... i just checked it!

Hi there. The link does appear to be broken. Any chance you'll put it back up? Thanks!

Another vote for re-activating this link! I've just recently discovered these African music blogs, so I'm a few years behind everyone else. Nkengas/Ikenga SSs are fast becoming a favorite from the Nigeria Special compilations and what I'm finding online. - Richard

I'll ask for the link to be restored, as well. Ikenga was a great group.