First off: I don't know if I have words to express how shocked I was to check the DivShare stats and find out that less than 24 hours after I posted it, the PJ Gray Boogie Trip Mix had been downloaded more 400 times, making it the most DLed file I've ever put up here! Did it get cross-posted on other blogs/forums or do y'all just love disco that much? (If the latter is the case, there's more where that come from, I reckon.)

Today's another quickie drop. This is an album that John B sent me a few weeks ago (the man positively spoils me, I tell ya) but I never got around to posting it because I really don't know anything at all about the band and I wanted to dig up some background info so's I could say something more than just "Here's the music; hope you like it as much as I do! Bye!"

My research didn't lead to much, though.* All I can say for now is that they are called Bobongo Stars; they may or may not be connected in some way with Ray Lema; their drummer played with OK Jazz on the classic 1982 Franco/Sam Mangwana classic "Cooperation"; they are clearly one of the new wave of Congolese bands of the 1970s and 80s that broke the typical Congo rumba mold by evincing heavy soul, funk and rock influences. 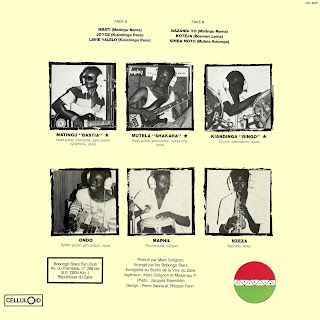 Also, this album, Makasi, is quite the shit. 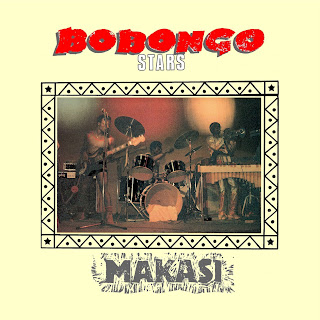 The download for the disco mix was actually quite slow (10K/s), so I restarted it a couple of times in hopes of getting a faster stream. I wonder if others had similar experiences resulting in the high download count.

hmmm... wonder what's up with that.

Yes, I had a similar experience.

This one is downloading at about 10k or whatever, so I shall try later and see if it speeds up a bit, or a lot. Thanks anyway of course.
Jon

Divshare's been acting a bit batty of late... a few files i tried uploading last week (again and again!) kept playing back at double-speed.... and then other times at half-speed.

in the end, i had to just give up put them on zshare... hope i don't wind up having to abandon Dicshare altogether!

I know the person who to create BOBONGO STARS. His name is shaka Râ, at present I believe that he lives in Paris. They have to create groups in 1984 I believe. This group influenced a lot Congolese music in the time.
The group is to separate. If you want more detail go on myspace:
myspace.com/shakarafriends

sorry for my english. hawa

Thanks a lot for the info, Hawa... I just checked out Shaka RA's Myspace page and I like what I hear there!

hi,
was this ever re-posted?
cheers, robert