When I was a kid, juju was never a musical genre that appealed to me on any significant level; I just didn't understand it. And I'm not even referring to the fact that its lyrics are pretty much exclusively rendered in Yoruba (a language of which I have almost negligible comprehension despite having scored an A-1 in it when the study of Nigerian languages in secondary schools was made mandatory in the late 80s)--I really couldn't comprehend it on a basic musical level.

But then, why should I have? I was an Igbo kid growing up in the southeastern town of Calabar; juju was a regional sound whose turf was mostly confined to the western part of the country. Point blank: if you were not Yoruba--or at least living in Yorubaland--there was little reason to give a whit about this semi-obscure lo-fi music pulsing with the accents of strange membranophones and melismata.

What's that you say? I'm overlooking the more "mainstream" juju stars like King Sunny Ade and Chief Commander Ebenezer Obey who have been able to maintain considerable popularity on a national level (and beyond)? True enough, but let's not forget that they did so by infusing their juju with more "universal" sounds like highlife, soul, afrobeat and country music. And frankly, I didn't really care much for them, either.

Part of my problem was probably the fact that (as is the case with a lot of Africans of my generation) most of my understanding of music has been founded primarily upon the appreciation of popular Western formats. As a result, it was often difficult for me to fathom any sound that I couldn't comfortably situate somewhere within the rock & roll or jazz continuua. Juju was to me (and many others like myself) colo, that is, unhip; redolent of days gone by when benighted darkies toadied before mustachioed and khaki-suited colonial maw-stuhs. In short, it was too traditional--being the opposite of "modern" and the antithesis of le sexy.

Had I been just a little bit less of an unlettered horse's hindquarters, I would have understood intutively that juju was far from "traditional" but rather was one of the first modern song styles to develop in a burgeoning urban Nigeria. Nor did it evince any of the purity that we commonly associate with "traditional" forms; it was in fact a highly syncretized genre drawing on musical idioms from various points on the West African coast and even across the Atlantic.

But like I said, most of my musical thinking centered around the West. Therefore, my journey to juju (as has been the case with my appreciation of many other indigenous African sounds) required me to zip up my boots, reverse the Middle Passage and work my way backwards to the roots (word to Lamont Dozier).

For instance, I have long adored music from South America, particularly the Afro-Cuban and Afro-Brazilian strands. Of course I knew that their intoxicating rhythms and even their idiosyncratic instruments were African retentions (or neo-African inventions) but only when I understood the story of the Aguda (or Amaros)--the Yoruba ex-slaves from Brazil and Cuba who returned to Nigeria and settled in Lagos, bringing back with them hybridized versions of African music like samba da roda, fado, burrinha and caretta--did I understand exactly how cutting-edge and mindblowingly modern juju must have seemed in the early 1930s. (I also understood why many distinguished Lagos families had names like Lopez, Fernandes, Pedro, Da Silva and Campos.)

And then you have all the other influences that shaped the development of juju: homegrown urban social musics like agidigbo, asiko, Muslim-derived sakara, Sierra Leonean palmwine music, "native blues" and colonial ballroom music and brass bands. But juju didn't really take off as a major genre until the late 1960s, during the Biafran War.

At the height of the Golden Age of Highlife in the 1950s and 60s, most of the top Lagos bands were ethnically integrated and often led by Igbos. When the Igbos all blew town during the war, Yoruba musicians were forced to look inwards, towards their own unique local forms.

This compilation, Great Juju & Sakara Music, is a snapshot of this period of self-discovery for Yoruba musicians. I'm not sure of the exact date of its release, but from the tone of the liner notes, I'm guessing that it's sometime in the very early 1970s:

Dominance of the Highlife music on West African music lovers is faultering [sic]. Other types of West African music generally associated with some set of people and regarded as underlings, are now coming into prominence. Of all these types the Juju music is seriously becoming outstanding.

Perched right under the nose of highlife, it (the highlife) will have to slice off a great part of its body to get rid of it and maintain the dominance. Presently, the juju music sounds ambitious and adamant, but the highlife music is impervious and unyielding, all to the delight of West African music lovers. Which will break the checkmate?

It will be seen that many bands now playing the juju music are off-shoots of highlife bands and it is not surprising that juju music has a little bit of similarity to highlife. However, there have been juju bands that have made names and stayed at the top but yet, there are other great bands with great juju beat, seriously seeking prominence without favour. The Fisher Music is delighted to introduce three juju bands on this album and one Sakara music band, to West African music lovers. Sakara music is one of the oldest music types in Nigeria and the particular artist on this album is a crowd-puller.

(SPOILER ALERT!! Highlife pretty much lost that standoff (at least where the nightlife in Lagos was concerned): You'll recall previous mention of Segun Bucknor's belief that juju was rapidly displacing his brand of highlife-inflected soul and funk, which led him to quit performing in 1975. More guitar-led brands of highlife--manifesting varying degrees of influence from Congolese music--continued to hold sway in the eastern part of the country, though.)

Have I rambled on too long? I feel like I have. Okay, one more thing and then I'll shut up. The last four tracks on this album (performed by Salami "Lefty" Balogun) are not juju but sakara. Please take note of the strong Islamic influence in the quavering vocal ornamentation and arabesque melody lines. 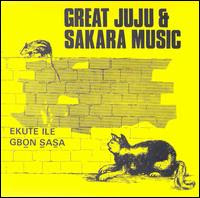 Email ThisBlogThis!Share to TwitterShare to FacebookShare to Pinterest
Labels: Back in the Day, Juju music, Naija jams

Nice one, I go check am.

actually, Femi's show here was LAST NIGHT (Sunday) and i intended for my first post this morning to be pics from the show, but...

one of the things that sucks about getting older is that going out becomes more of a chore than a pleasurable diversion.

i had someone i was going with, but at the last minute they backed out talking about "oh, i have a presentation at work in the morning." so i figured, "okay... i'll go solo. nothing wrong with that." after all, it's FEMI, isn't it? how many times a year do i get to see him?

but then, i found myself thinking about how these shows always start like three hours late, and how i had to be at work first thing in the morning myself, and it was raining, and the lines and the hassle, and i had to work on a TOO MUCH BEAUTIFUL WOMAN trailer and treatment and...

in the end i was like "maybe i should just stay home and watch the Flavor of Love Girls: Charm School reunion instead."

oh yeah... great to see Naija Jams back in action, though!

sorry to hear all that. So you are in Quebec then or was the Boston show moved?

I'm interested to hear more about TOO MUCH BEAUTIFUL WOMAN... if there's an opportunity for some work on the graphic/visual/motion design front, I'd be interested... Feel free to hit me up: naijajams at gmail.

anyway... as far as that other thing you're talking about: believe it or not, but just last week i was looking for a motion graphics person!

Looking forward to hearing from you.

Boston represent! (i missed the show too, alas)

oh, we got another Beantowner in the house?

I dig your blog. Stumbled here from naijajams... I'm seeing Femi in concert tomorrow in DC. I'm jittery with excitement.

Interesting and cool stuff. Some of the King Sunny stuff Island released in the UK in the 80s was nice as I remember, with a fair bit of remixery going on. What happened to their offshoot, the Mango label I wonder.
I must post the very few bits of it I have sometime soon.
thanks and god luck with the film.
And all music one doesn't know much about tends to all sound the same until you muster the enthusiasm to learn a bit about it I guess. So don't beat yerself up about it ;-)

i miss the Mango label, too... when was the last time i saw a release from them? the mid-90s?

i guess when Chris Blackwell sold Island to ripped apart into faceless corporate stock, Mango was one of the bits that got dustbinned. shame about that!

anyway, one of these days i think i might be posting some of that Sunny Ade stuff from that "I'm telling you, mate...HE IS THE NEXT BOB MARLEY!" era.

and thank you for the kind thoughts re: the film!

Man,
I`m from Brazil.
Your Blog save my life.
I am very interested in juju and highlife music.
This record with sakara song is the best.
Thanks.
If you need some brazilian stuff, just email me.
barrosfelipe@hotmail.com

well, thanks a lot, friend!

glad you're enjoying the blog... i'll try to keep that good stuff coming!

and i will surely email you because i can NEVER get enough good Brazilian music!