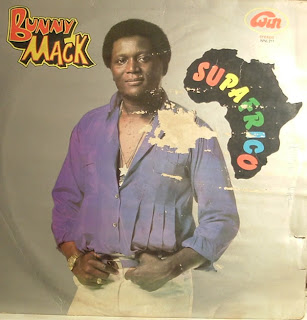 Can it be I stayed away too long? Did you miss my posts while I was gone?

Been a bit busy lately, so I haven't been able to do any blogging... Fret not, family; I'll be back in full force next week.

In the meantime, I figured I'd drop a l'il somethin' to kick the weekend off right quick.

This here is "Boogie Trip," a funky (albeit too brief!) disco mix by PJ Gray of the Galactic Fractures radio show. Gray does a bang-up job, deftly pulling together a refreshingly diffuse selection, even including more than just a little dash of old skool Naija disco/boogie flavor.

Hence, sitting alongside killer cuts by The Caprells (a Jackson 5esque family band from Pittsburgh, best known amongst funk aficionados for their trippy version of "Walk On by") and Georgia's Together Band, you'll find the Esbee Family (who were probably my favorite Nigerian boogie band in the early 80s) and Doris Ebong's "Boogie Trip" (Cross River Radio, Calabar used to play this one a lot, not just on account of Doris being a local girl, but because the record is an ecstasy of funkiness).

I was particularly delighted, however, by the inclusion of Bunny Mack's "Let Me Love You," especially since I've been wanting to post up some of Mack's tracks for a while. Now I don't doubt that many of you might have attended an African party at some point during the past 27 years, and thus already have some familiarity with this hallowed slab of dancefloor dynamite; for those readers who remain innocent of its allure, allow me to elucidate:

"Let Me Love You" is, quite simply, one of the biggest African records ever. A collaboration between veteran Sierra Leonean singer Bunny Mack and London-based producer (also of Sierra Leonean extraction) Akie Deen. Deen really deserves an entry of his own, as he was a pioneer in promoting African music (and Black music in general) in the UK and was a key player during the period I sometimes call "the London era" of Nigerian music.

His main claim to fame, though, is his pan-African fusion of West Indian calypso, Brazilian samba, Sierra Leonean maringa, West African highlife and Congo rumba, sewn together with seductive disco beats and glossy production values. He called this style "discolypso," and it was quite a big deal indeed during the late 70s and early 80s.

("Ivory" by Nigerian singer Kio Amachree was another massive floor-filler in discolypso mode, though I'm not sure it was actually produced by Deen. I need to check that up.)

The release of "Let Me Love You" in a 1980 was the pinnacle of the phenomenon; the record was a bonafide international hit, reaching the number 5 slot on the UK disco charts and #76 on the singles chart, becoming an instant classic throughout most of (Black) Africa and the Caribbean, and being embraced even as far afield as Colombia.

The record has recently found new life on the international dance music scene, even inspiring remixes and remakes.

Downloaded at decent speed at last. Thanks for that. All a bit smo-o-o-o-o-o-th for my tastes, but there are some interesting bits in there.
incedentally i have put up a couple or three 1980's 12" singles on the Mango and the Island label on Mixed Messages. You might be interested.
cheers,
Jonathan

well, i'm definitely glad to hear that DivShare's gotten its act together... and also that Mixed Messages is back from hiatus!

i'll go check it out.

Oh man, I wish you'd re-up this. I just discovered your site. Love it!

Ha... Seems like so long ago, V.Bee. I lost a lot of this stuff I used to have on DivShare in a hard drive crash in '07, but I'll see if I still have this mix and get it up later.

would be really nice
also if it's possible could you upload "Ivory"by Kio Amachree(if u have that one:))
thanks anyway