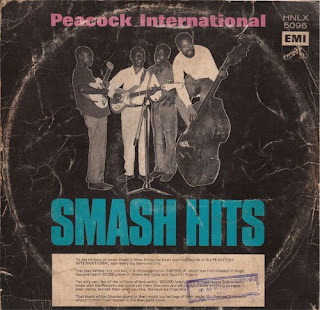 To the millions of music lovers in West Africa, the heart warming sounds of the PEACOCKS INTERNATIONAL span every big town and city.

You may believe it or not but it is no exaggeration. SAMBOLA which was first released in a single has sold nearly 50,000 pieces in Ghana and twice that figure in Nigeria.

Yet only very few of the millions of fans within 150,000 family units in Nigeria and Ghana really know who the Peacocks are. Some call them Ghanians [sic] and are ready to stake anything to argue their claims, but call them what you like, the boys are Nigerians.

That touch of the Ghanian [sic] sound in their music is a heritage of their leader Mr. Raphael Amaraebe whose musical career started in the Gold Coast.

"Call them what you will" they sez.

Their stripped-down Rex Lawson-meets-King Onyina-style guitar highlife, however, I will call "sublime":

Sorry about the noise level on these tracks, my peoples... I had to dig deep for this one. There's no year indicated on this record, but John B.'s discography tells me that it's from 1978. I must say that surprised me a bit, as I had assumed it was a little older than that--it's an EMI release, but rather than the familiar red & black EMI label, it sports the old-school black & white label with the His Master's Voice logo that I don't think I've seen on any EMI record from after 1974 or so. Oh well... Learn something every day!

The main reason I posted this, really, is for mnemonic purposes: I wanted to remind myself that the Peacocks' classic "Eddie Quansa" (b.k.a. the "Zebrudaya" theme song) appears on the new Nigeria 70: Lagos Jump compilation from the recently-back-in-business Strut Records, and I have been meaning to do a write-up on it... As well as on Analog Africa's African Scream Contest and the third installment in Soundway's Nigeria Special series, Nigeria Rock Special.

Time's been tight lately, but I'll try to get to that by this weekend.

Email ThisBlogThis!Share to TwitterShare to FacebookShare to Pinterest
Labels: Back in the Day, Highlife, Naija jams, Peacocks International

You may be right about when the record was issued. As you note, EMI NEVER put the date of issue on the label. I think I came to the 1978 date through a process of extrapolation comparing the number with other EMI reference numbers that I did have issue dates for.

Nelly Uchendu is going up in a day or two!

well, if you actually did compare the reference numbers, you did WAY more work than i did!

(that stuff can be tricky, though... i've tried comparing the serial numbers to figure out dates on some labels and concluded that some of these numbers were assigned almost randomly--especially on a label like Tabansi)

Sambola Mama was the sound of 1970 in Owerri. It took Owerri and environs by storm since the Peacock boys came from around that town. Dan Orji comes from Orji Autonomous community of Owerri North (but part of the Uratta clan). Danny was the vocalist for the Peacocks. He was to leave the band in 1975 to form his own group called Skylarks. Ralph Amarabem went blind some years ago.

I can tell you therefore to list Sambola Mama for 1970. It was part of the sound that soothed people who had come out of a terrible war. Also in that album is Meri merimam where he sings about his wife Mary. That was another hit of the time.

thanks for the insight (as always), DHM!

yeah, i know the Peacocks were a big phenomenon immediately after the war. i take it they were popular in the Western region too, or was it predominantly an Eastern thing?

The Skylarks also did a version of "Sambola Mama." I think I heard Amarabem died a few years back.

I also heard that "Sambola Mama" came out shortly after the war, but "Smash Hits" was issued a few years later.

I also saw a CD a couple years back (new recordings, not reissues) by a new version of the Peacocks "led by Dan Orji."

so, you didn't pick up that Dan Orji CD, did you, John?

Somebody loaned me his copy (it didn't have a cover but it was the original pressing, not a rip, as it was printed) and I copied it.

Unfortunately, the song titles weren't printed on the CD, so I can't tell you what they are. I could rip it and upload it for you.

Actually, I've been planning a post on the Peacocks for some time, just never got around to it. They did plenty of great songs!

P.S. Maybe you could clarify this for me: Is Orji from Arochukwu? It seems a lot of people from that area have that surname (or Oji).

alright then... i guess i'll just wait for the eventual Peacocks post, because i do want to learn more about them!

I see your occasional posts in the Igbo Forum. You got a good thing going there. Yes, Danny Orji is from Owerri but is really Aro. His people settled and made Owerri their home many years ago. However, like most Aros, they tend to return to the ancestral home in Arochukwu. Danny, I understand, has moved completely and settled back in Arochukwu. Not all Orjis are of Aro descent. But most Kanu are.
If you've got the Peacocks as indicated, pls post.

I was wondering if you would be able to fix the links for the songs, because they aren' working, and my dad said that the peacocks were shit back in the 70s.

so it looks like NONE of the links on the blog are working now... i thought that it was just the more recent ones!

This is one of the best blog Ihave visited recently. How can one get this "Sambola Mama" and other musics by this group, Peacocks. I will really pay for them, I dont mind the cost.
Current generation has no music, except just a few, which can still not compare to these evergreens. please kindly help.
Keep up the good work.