There she is... Miss Nigeria! 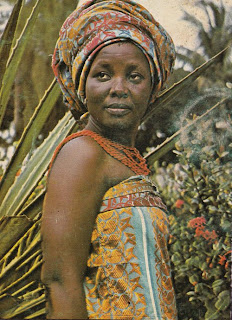 While Lady Julie Coker is very often hailed as the original Miss Nigeria, in truth, not only was she not the first woman to hold that title (that would be Grace Atinuke Oyelude, in 1957), she was never Miss Nigeria at all!

Lady Coker was actually crowned Miss Western Nigeria in 1958, and while she was a Miss Nigeria contestant in the same year, she came in as first runner-up to Helen Anyamaehuna (below). 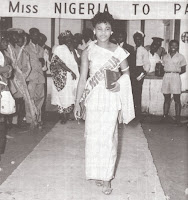 Although she did not win the contest (and a contest it was in those days, rather than a "pageant"--hundreds of young ladies sent their photographs in to the Daily Times and the winner was picked by a panel) she might as well have been Miss Nigeria anyway, as she embodied the spirit and values that the title professed to represent: In 1959, at the age of 19, she became one of the first broadcasters on Nigerian television.

(Much like the Miss Nigeria thing, her status as a television pioneer is famously misconstrued. While she is widely reputed to have been the first broadcaster on Nigerian television, she was actually again a runner-up in this category: Anike Agbaje-Williams was the first woman--and the first person, period--to appear on Nigerian TV. Julie Coker was Agbaje-Williams' trainee and shortly thereafter took over when her mentor went on maternity leave.)

Julie Coker remained a constant presence on TV until the late 1980s. Along the way, she also dabbled as an actress and radio personality, and for a while was married to fellow newscaster Richard Enahoro (who in a previous life had been a popular highlife musician, playing guitar in Roy Chicago's Rhythm Dandies); on air, the pair projected an easy air of cosmopolitan glamour as the country's first power couple. For many years, Julie Coker was the most famous and admired woman in Nigeria.

So, when the Nigerian music industry mushroomed in the 1970s, it made sense for her to parlay her celebrity into a recording career, especially as female performers were rare at the time. 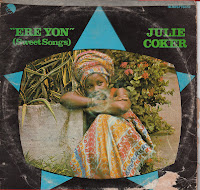 Her first album, Ere Yon (Sweet Songs) was released in 1977. Stalwart producer Odion Iruoje helmed the sessions at EMI Studios in Lagos, with ace players such as guitarist James Eyefia, bassist Kenneth Okulolo (of Monomono fame) and Johnny Wood (of S-Job Movement and Sonny Okosuns' Ozziddi). The material, as was the vogue for female singers at the time, is composed of rootsy arrangements of folk songs drawn from Coker's Itsekiri background.

Acccording to the sleeve notes, the title track "refers to the legend of the water spirit that usually comes out during festivals in the riverine areas to listen to songs and music of the inhabitants," while the song "Elelemi" is described as "a folksong which young maidens chant as they play on moonlit nights dancing around in circles like a maypole dance." 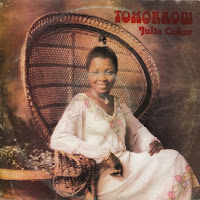 By 1981, the status of women in the music business was rapidly changing. Eighties ladies like Dora Ifudu, Oby Onyioha and Onyeka Onwenu were appearing on the scene, their flashy, unapologetically pop poses standing in stark contrast to Julie Coker's old-school conservatism. Coker's album Tomorrow shows her adapting to this new climate. Produced by James Eyefia, the album was recorded in the UK with a few of the usual London players (Jake Sollo, Pam Douglas, Carol Ingrams, et al) and featured Coker singing more in English over "a good blend of disco, crossover highlife and balad [sic]." "Sogio" is a remake of "Elelemi" and "Gossiper Scandal Monger" is singled out in the notes as a track that "makes for good disco dancing."

Email ThisBlogThis!Share to TwitterShare to FacebookShare to Pinterest
Labels: Back in the Day, Julie Coker, Naija jams

interesting!...i always learn so much coming here...i love it...listening to the music now...

My friend just told me about this blog. So cool. I was born in the '70s so some of this makes me nostalgic. Thanks for the piece on Julie Coker. Never even heard of her. My mom's Itsekiri so it's nice to hear some music from that side as I don't know any Itsekiri songs other than the requisite secondary school choir "Jemine." Thanks a lot!

thanks for checking in, chanteuse... hope you stick around!

(and if you like, i can probably try to hook you up with some more Itsekiri music, later)

interesting post...i never heard abt this lady..!!
ur blog is so rich..mm!!

More Itsekiri music, mo be do bami se. I hate that the Itsekiri language is so close to Yoruba. Kinda takes away from the "exoticness" I would be affecting. Let's see if you can translate the above phrase....and give us some toritseju tunes.

hmmm... i don't think i know a word of Itsekiri, chanteuse! but if you say that it's close to Yoruba, the above phrase would be... ummm... "I urge you to do this for me?"

I found your blog by accident, while searching for some stuff on The Lijadu Sisters and you really made my day...took me a long time to download, but well worth the wait.....just a quick correction on your write up on Julie Coker - she wasnt actually the first female broadcaster on television. That honour goes to Mrs Anike Agbaje- Williams who was actually the first person, male or female to appear on WNTV-WNBS in 1959.
Anyways, thanks again for all the detailed info on those musicians and indeed songs that brought us so much joy back in the day......

well, i am glad you are enjoying the blog... and thank you for the correction.

i thought that Anike Agbaje-Williams had only done radio, and then took time off to spend with her family just as television was starting... and that her spot was then taken by Ms. Coker.

apparently, you are indeed right... she did make the transition to television, but left shortly thereafter.

thanks a lot for the correction; i'll edit the post now. and by all means... help me out with my historical accuracy whenever possible. gathering and verifying a lot of these facts is HARD work!

Hello madam Julie coker, i will like to know more about your family background.Remain Blessed. Sope Coker (sope.coker@yahoo.com).

Julie Coker's "Ereyon" album was released either in late 1979 or in mid-1980, most likely the latter date. She turned 40 in the summer of 1980 and the album was part of the elaborate commemoration of the milestone. The title track is a very fine Ishan tune; a year or so later (1981) another Ishan singer, a young male whose name I forget also reprised the folk song. He was of the same wave as Jide Obi, Mike Okri, Kris Okotie, Onyeka Onwenu, Oby Onyeoha, Felix Lebarty and Tony Okoroji, all whom made their very first albums between 1980 and 1981. Thanks.

O yes, the young male artist was Gbubemi Amas and -- so sorry -- both Julie Coker and Amas are Itshekiri; which makes "Ere Yon" and Itshekiri, and not an Ishan, song. My mistake, pardon!

wow... it looks like my attempt to date the Ere Yon album were well off the mark, weren't they?

(i think i've gotten a LOT better at figuring album years in the months since i originally wrote this post, though!)

thanks for the info... it makes a lot of sense for them two records to have been closer in release than i put them at. i'll correct that now.

(i really could have sworn that the album had a bit of a Festac-period feeling to it, though!)

Hello. I just stumbled on this piece on the lady Julie Coker and its beautiful. I am a student of Mass Comm, UNILAG, and am writing an essay on Nigerian TV and its begining with focus on women like Anike Agbaje-Williams, Julie Coker and Rosemary Anieze-Adam.

I would appreciate it very much if you could help me with a little background on Julie coker or tell me where I can reach her.

Julie is a wonderful, kind hearted and still very talented woman. I had the pleasure of seeing her in action whilst filming a movie that a friend was filming and wrapping up yesterday, Ikpaya, am Itsekiri Movie. Aja mo kian ghan

Julie is a wonderful, kind hearted and still very talented woman. I had the pleasure of seeing her in action whilst filming a movie that a friend was filming and wrapping up yesterday, Ikpaya, am Itsekiri Movie. Aja mo kian ghan