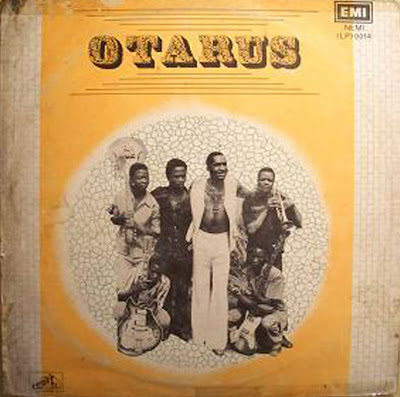 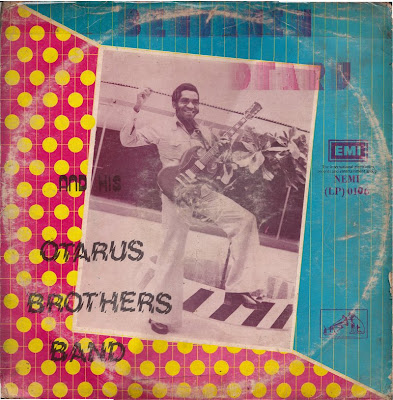 (Sorry it sounds slightly rough, especially at the beginning of each side; I don't know... Visually the vinyl is VG+. It's annoying to me, especially since the spare texture of Otaru's music makes the noise a bit more apparent, but a lot of people seem to want to hear this record so I posted it anyway.)
Posted by Comb & Razor at 3/21/2009 09:52:00 AM

Much thanks! There is a little taste of Otarus on the "Highlife Haven" blog, and I'm very excited to hear more!

Splendid!
Thank you very much for sharing.
Now, i would like to listen OTARUS LP0014.

Wow, this blog is terrific. Thanks so much for sharing this amazing music. Where do you get all these wonderful albums? Something also needs to be said about the graphic art of the covers! incredible, I'll be coming back very often....

Where do I get these albums? Well, some of them are things that I've had stored away in dusty crates for years... others are things I acquired more recently, either directly from Nigeria or from wherever I can get them!

I've actually been thinking for a while about doing some posts specifically on LP graphics. (I'm probably intimidated by the amount of scanning that might require, though!)

I just might get around to it one of these days, though...

Thanks for stopping by, Alejandro... I hope you'll stick around!

On a roll - for those of us mouldy figs who like our highlife instead of our disco. thanks. Super treats this month. Wondering - does anybody have any st.augustine's rovers? the tracks I've heard have been lovely.

I don't have any St. Augustine with me... I got a couple of his records when I was in Nigeria, but I had to leave behind a bunch of stuff due to excess baggage.

I'm still trying to work out getting that stuff sent to me... So we'll see!

How cool! I loved the Otarus tracks posted by Highlife Haven and Voodoofunk and I really wan't expecting to run into any more. Thanks a lot!

count me among those who wanted to hear this LP. Exactly the sort of thing I love!

(Nice blog you got there yourself, by the way!)

Thank you so much!

I've loved the OTARUS LP0014 album for some time now, and always wanted to hear the other two.

My copy of OTARUS LP0014 is quite scratched, but by using a simple clean up program I got most songs to sound pretty good. I'd be quite happy to upload it here - just let me know if you'd like me to do that and how.

By the way, according to the information I got from the ebay seller when I saw these two albums appear, 0014 is from 1973 and 0106 from 1974. The information is not necessarily correct of course.

That would be really princely of you to share the 0014 with us.

What I would suggest is that you email the album to me at combrazor (at) yahoo dot com and I will upload it from there.

1974 for 0016, huh? That makes sense... That was my initial guess, but considering the fact that the sleeve notes say the band was formed in 1972 and this was their third LP (after a series of singles), I estimated the release of one album per year starting from 1973.

(The album definitely isn't from any later than 1976 since the notes make reference to Nigeria's old administrative regions which were dissolved in 76.)

But I guess if you assume that the first album was released in 1972, then that works too!

That's my old man yo (Col. Sedenu), and his best pal (Inu-Umoru) dedicated to on those tracks. They are stalwarts in Auchi - Edo state and it is not unusual for these musicians to praise-sing in return for real or imagined favors.

That's interesting, Anonymous... Could you tell us a bit more about the content of the lyrics?

Unfortunately, while I can understand the basics of our lingo, those lyrics are beyond me. When I speak to the old man, I might be able to post an update. He's featured in this publication ...

I'll see what other Etsako / Owan highlife LPs he can muster. There were quite a few of them about when I was a kid.

Thanks for the ingo.

And yes... I am very familiar with the "heroes industry" in Nigeria, though I've never thought to describe it as such.

Seem like i'm late to this party :(
Can someone repost this ?