And like the last Bongos LP I posted, it's a bit rough. What can I say? Bongos' music was and is THAT adored in Nigeria--his records are played till the grooves fall off!

(I think I have a better-condition copy of this album somewhere but I really cannot find it right now, so I guess we can all tolerate the Rice Krispies SFX a bit, right?)

This 1980 outing finds Ikwue at the height of his mainstream popularity. Still riding high on the monster wave of goodwill generated by his 1978 Still Searching LP, a supremely confident Bongos tries out a few different musical flavors: a touch of soul, a little funk, calypso, and even old-school, Ray Charles-influenced R&B.

(The album's most memorable hit was "Mariama"--later the subject of scandal when the rumor spread that it was about First Lady Maryam Babangida in the mid-80s.)

Tear Drops would be one of Ikwue's last notable successes, though; the following year he released the classic soundtrack to the TV drama Cock Crow at Dawn and thereafter faded from the limelight. His next album, 1983's Songs I Like to Sing, barely registered on the public radar despite production from Jake Sollo and would be his last release of the 1980s (unless I'm mistaken, that was his last release, period).

Bongos has been on the comeback trail over the past couple of months though, and not surprisingly, he has been re-embraced warmly. Just as I was preparing this entry, I came across this article on Ikwue as a figure of pride and inspiration for the Idoma people. It made me think maybe I should have posted Bongos' album of Idoma-language folk songs, Ihotu, instead. I'm pretty sure I have a NM copy of that one.

Maybe later in the week. 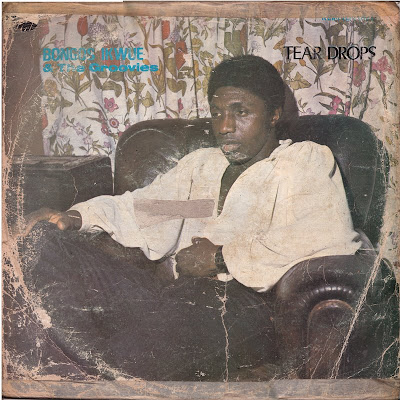 i would have loved to see a copy of Cockcrow @ Dawn as well. i've been looking for that album for a long while.

I remember an uncle who used to blast American country music in the car and I thought, what is this old man listening to? and see how comb and razor has highlighted a country music influence in Nigerian music past, there is always a connection. Always!

Everything is connected, Ivory... That's the way of the world!