Well, not "rock" in the balls-out, yeh! yeh! yeh! sense--you'll find no searing solos here, no raucous drumming, no ecstatic abandon; but with its butter-rich production (courtesy of the late, great Biddy Wright), Johnny Woode's groovy organ lines and Godwin Ironbar's soulful vocal delivery, the album does represent an attempt to bridge the gulf between the old-school highlife orchestras and the youth-driven Western pop music that had enthralled the kids' imaginations in the post-war era.

The always-tasteful Biddy Wright was an apt choice to shepherd a project such as this, having been well familiar with both worlds--he led the beloved Lagos highlife dance band Wura Fadaka in the 1960s and then rocked out with Ronnie Laine of The Faces in the 70s. Ironbar himself is credited as writer, arranger, lead vocalist, guitar soloist and conductor of the fine cadre of musicians on this record. He sounds a bit Victor Uwaifo-inlfuenced to me, but maybe that's just because they both sing in the Edo language and embrace soul music accents in their highlife.

If I recall, several tracks from this record (along with Jackie Mittoo rock steady instrumentals) were frequently used as theme and interstitial music on NTA stations in the 1970s and 80s, especially "Ukpona Mie" and the "Let's Get It On"-citing "Okpenobodi."

(This is another VG+ record that's sounding a bit weird when ripped... I wonder if it's time for me to replace my stylus or something. I'll have to look into that... Let me know if it bugs you any and I might try ripping it again later.) 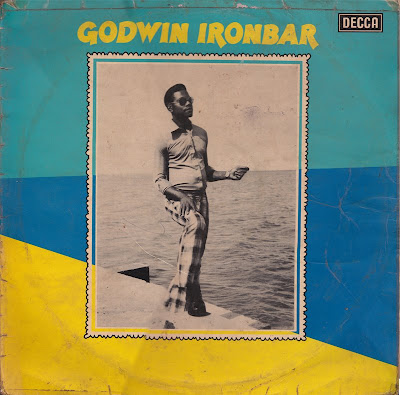 Thanks a lot for stopping by, Louisville Dan... Hope you like what you hear!

Many thanks. Listening now and loving the organ work!