(Or maybe this should be Part 4, considering the fact that I my last "Escape from Lagos" entry ended up posting three times and I never bothered to delete the extra ones)

We've been in Lag for more than two weeks now, and I have to admit that this trip has been something of a bust. Kinduva "one step forward, two steps backward" type thang.

Anyway, I just wanted to holler real quick because it's been a while since I posted anything... I'll be back in full force tomorrow, mi gente, this I promise. I'll also be back in Calabar tomorrow... We were supposed to have returned this evening, but we missed our flight. That's the thing about whenever we come to this monstrous metropolis... It's like the city swallows us and won't let us escape.

Shut up, Rosey! Shut up!

Denis, Koko and Nana sit in silence, pondering what they need to go through to complete TOO MUCH BEAUTIFUL WOMAN.

DENIS: Would you guys call me a bitch if I were to cry right now?

NANA: Actually, I’ve been kinda waiting for one of you guys to cry first so that I can feel like less of a bitch when I do.

Grace lies on the couch watching Channel O, her feet in Nana’s lap as he gives her a rather half-ass foot massage.

GRACE: Maybe you should cry. You’ll probably feel better if you let it out instead of holding things in the way you do. (extends arms in an embrace) Come on… Let it all out.

NANA: Hell no. I’ll never cry. And you know who else never cried?

NANA: The most the Duke ever did was turn away a little and say “Hol’ on a minnit, pardner… I think I got somethin’ in my eye” and then wipe away the eye-water and get back to the business of killin’ Injuns or Japs or gooks.

GRACE: You know this obsession with what John Wayne would and wouldn’t do is a crazy way to live your life, right?

I was about to continue the story about my trip home

But on the real, I'm way too overwhelmed by all the support you guys have thrown our way right now... I'll post that shit up tomorrow. I wanna thank each and every one of you guys, though... I gotta think of some way to do that. I guess making the best film we can is probably the best way to do that, huh?

Anyway, for now, here's some photos of our female lead, Emma... (and some others if Blogger stops acting up) 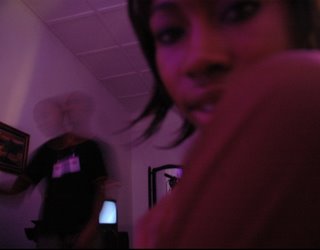 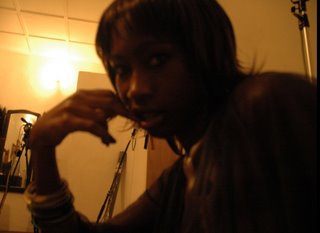 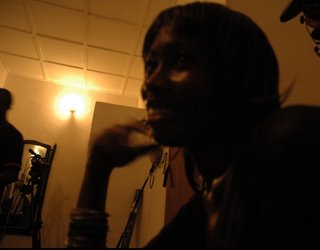 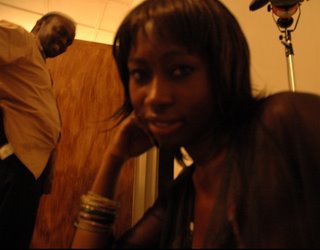 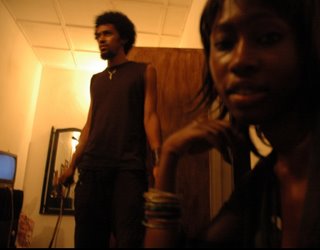 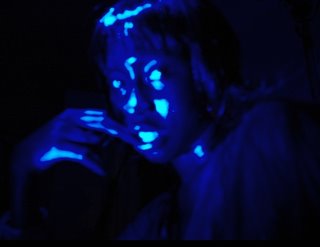 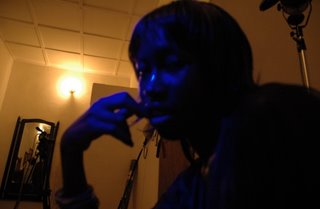 It’s 12:20 a.m. and I’m sitting in the dark, gnawing on corn, coconut chunks and spicy barbecue beef as everybody sleeps around me.

Remember how I told you we had to send our two leads back home to Lagos and hope that they would come back to Calabar when we were ready to shoot again? Well, you didn’t actually think we were gonna sit around wishing on (movie) stars, did you? Hell no! We followed them to Lagos and we’re gonna shoot them here.

I actually quite like the idea; the story is set in Lagos after all, and that unique Lagosian sense of chaos and energy has been hard to replicate in a small town like Calabar. It’s good for Koko to be back with his family, too (and I must admit that I was missing Uchenna and the kids myself) and even Denis – who kinda hates Lagos – is enjoying being back.

We’re gonna start shooting here in a few days and in the meantime we’re lining up all the stuff we need, like lights and equipment (Unfortunately, it looks like we’ll have to deal with those Cinekraft dicks again, though).

Right now we’re a bit frustrated, though… It’s hot as fark and NEPA is on their regular bullshit. I don’t know how many of you are hip to the whole NEPA thing, but it’s been a running joke here in Nigeria for… I dunno, 30+ years. NEPA officially stands for the Nigeria Electric Power Authority but colloquially it means “Never Expect Power Always.” You see, the national electric company only provides electricity some of the time, so electric power generators like this 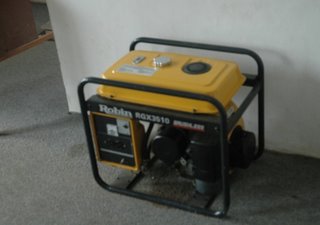 are essential household appliances more common than microwave ovens. Ours is acting up. It’s been acting up since we came back to Lagos on Sunday, but we dropped it off yesterday morning and paid for it to be fixed. Allegedly it was. So we’re all chilling, watching Kiss Kiss Bang Bang on DVD when all of a sudden, the electricity conks out again.

Koko goes out to fiddle with it while me and Denis wait in the living room for him to come back so we can get our grub on. We had eaten lunch at about 5 p.m. – less than 2 hours before – but for some reason we were hungry again (Denis says he’s gonna blog about metabolism and how odd sleeping and working hours affect it) and I felt we should eat again at 7 p.m. rather than having to eat at 1 a.m.

So we went out and got a mess of suya and corn on the cob and coconut and plantain and were ready to chow down before we were plunged into darkness.

Koko was away tinkering with the generator for a long, long time… Me and Denis sprawled on the floor and he gradually fell asleep while I belt out off-key renditions of Motown tunes. I was at the end of “What Becomes of the Brokenhearted” when I realized that Koko was lying on the couch, simmering and then eventually sleeping, too.

Like, I realize this generator thing is frustrating as hell, but how does that translate into us not eating? I don’t need the lights to see where my mouth is!

I must have drifted off during my Stevie Wonder medley, but I was awoken just before midnight by vicious hunger pains. I called my friend Grace to be the first one to wish her a happy birthday and went to the kitchen to get my grub on, dolo.

So here I am now… As all the world is counting sheep, I count the moments of the last few days.