Awwwwwww yeah, party people! I'm about to teach y'all a brand new dance!

Well... It's really not that new, since it's been danced for years and years by producers all over the world, but it's new to me. Some might call it "The Creditor Creep" or "The Money Hustle" or "The Shaft" or "The Cheque's in the Mail." I call it "The Deadbeat Dodge"!

You can do this dance just about anywhere and any ol' time - when you're sitting on the john or eating lunch or watching TV or trying to sleep at five in the morning. The only music you need is the sound of a ringing cellphone.

Now, my current ringtone is "Let's Make This Precious" by Kevin Rowland & Dexy's Midnight Runners, but it don't matter what the ringing sounds like. All that matters is that when you answer the phone, you hear the voice of an actor or a production assistant or a sound engineer or camera assistant or an equipment rental outfit:

"Good morning, director. Sorry to bother you at this time, but about that money you still owe us..."

"...Checked my account this morning and the funds still haven't been deposited..."

"Okay, I'm kinda on vacation right now, spending time with my family and stuff, so there's nothing going on at the moment. But I'll be getting some more funding when I get to Lagos next week, alright? Just call me back then, alright?"

"Hey, I'm in a meeting with some investors right now. I'll call you back later tonight, okay? This is your number, right? (So's I can be sure to avoid it when you call back)"

"Look... I'm just the director. If you wanna talk about creative concerns, I'm your man. If it's administrative, call Denis. If it's money, talk to Koko."

Alright, party people... Here comes the best part! You know the breakdown - the part of the record where all the words and the melody and all that fall away, leaving just that basic beat? Okay, we're gonna stop answering the phone and just let the music play and play and play...

I gotta admit, it took me a while to get a hang of the rhythm, but now I'm really becoming an ace when it comes to doin' the Dodge. Yes sir, I'm like a one-man Sam & Dave.

Hard to believe it was barely two weeks ago that I asked Koko:

"So... How long do we plan to stay in town once we wrap production?"

"Um... And then how are we planning to settle all our accounts before we leave?"

Koko doesn't say anything. He just smiles mischievously. I feel a pain in my heart.

I'm silent for a minute. "I'm really not comfortable with that."

I find Denis by the bar and we share a bottle of Fanta for breakfast. He's not cool with the exit plan, either. We're just starting out in this business and so far we like the fact that we've been pretty fair in our dealings with people. We don't want to get the reputation of being deadbeat producers.

Then again, that's kinda the way the game is played, isn't it? Right after my exchange with Koko, Frank and Linda came into the room and proceeded with a completely unrelated conversation about some of the work they've done in the modelling world - print ads and billboards and stuff. 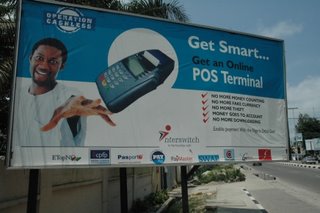 Me and Koko sat down and listened as these two beautiful people spoke quite matter-of-factly about being stiffed for up to eighteen months at a time by The Coca-Cola Company and Motorola and the big phone companies.

Now if even massive multinational corporations have trouble issuing payment on time, why the hell should I - a startup producer - be stressing out over it? Hell, I think these people actually expect to have to pull teeth to get paid.

Circumstance has made a liar of me

So I promised to post some stuff yesterday and that didn't happen. What can I say? I promised to pay a bunch of actors last week and that hasn't happened either. Shit happens... or doesn't happen; after all, I spent most of yesterday waiting around for a meeting that ended up not happening. The pilot thing is happening, but not quite at the speed that I would like it to... I'm getting antsy, feeling like I need to get out of here, get back to the States and raise the money to come back and finish TOO MUCH BEAUTIFUL WOMAN as soon as possible.

Funny thing about it, though, is that at the moment I am kinda stranded in Nigeria. When I called the airline to postpone my return last time, I had to give them a "theoretical" date that I might be coming back... I selected September 30th. They said cool, there'll be no problem changing the date again if I have to.

Of course, I couldn't select a date because I wasn't sure exactly when I would be done with the pilot... Come September 30th (last Saturday) I go to the Lufthansa office and they tell me it does't matter what date I choose because I can't change the date on this ticket anymore anyway because I've been in Nigeria for more than three months. So unless I planned on getting on the plane that afternoon, my ticket was worth about as much as toilet paper (and considering the rough edges and low absorbency of an airline ticket, a lot less useful, too).

I haven't written anything in a while, folks - well, i haven't posted anything, anyway. I haven't been online in almost two weeks, so I got a lot of shit just piling up. I'll post it tomorrow.

On one hand, I've been really busy and on the other I've been so bored that I've thought of amputating my own limbs just to liven things up.

Oh yeah, and speaking of amputating limbs... I've been having a lot of trouble with my bum shoulder so I'm working with one arm these days. I'll tell y'all about that tomorrow.

Hmmm... I just realized that I didn't even get around to posting Part 2 of the last post.