The Roots of Nigerian Rap! 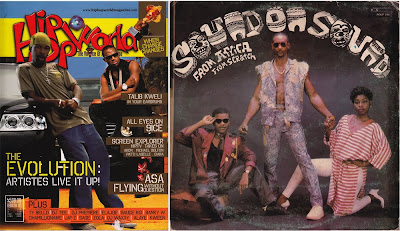 Imagine the imagination of one useless small boy the other day... Just because I said that I'm not feeling most of the contemporary hip-hop coming out of Nigeria right now (though I'm happy for its success), this guy had the audacity to tell me that I just don't understand hip-hop and I need to take the time to go and study the history of the music and culture!

My guy... I was repping hip-hop in Naija before most of these kids out there were even a warm glow spreading across their dad's groin region. And I should mention that this was way before rappin' was by any stretch considered "cool" in Nigeria. Yo, where's my man Deinma? Where's Koko? Molo, do you hear me? Remember how we were ridiculed by our peers? Remember how when we would bust rhymes in the staircase, everybody thought we were stupid (and not stupid fresh)? Remember when the verb "rapping" because synonymous with talking idiotic nonsense? Remember how they told us that rap was a passing fad that went out with breakdancing and that we were just too retarded to see that it wasn't going to last?

Today in Nigeria, hip-hop is the music that revitalized the country's near-moribund music scene and is considered "the voice of the generation" but I want to give props to the first generation of Nigerian hip-hoppers who built this city. So me and my peeps at AfricanHiphop.com have collaborated on this lesson on the first decade of rap music in Nigeria.

CHECK IT OUT HERE. CLASS IS IN SESSION.