So yeah, we were on the way to Yinka Davies and we still haven't gotten there, have we? I was trying to post some music and stuff in the next installment and I've been trying to figure out the most efficient way to do this in the new Blogger (which has been a bit hard to do since I've had limited Internet access over the past two weeks). I will get back to the story soon enough, but in the meantime, I just wanted to check in and throw up some random rants and raves.

A little while ago, someone asked me to speak a bit further about my disdain for "calabash cinema" and my frustrations with the expectations many western audiences have of African films that I briefly alluded to in this post. Just the other day, I was thinking about how to broach this subject when something threw the issue into stark relief for me. As it turns out, it wasn't a film but a book. Or rather, some people's reactions to a particular book. 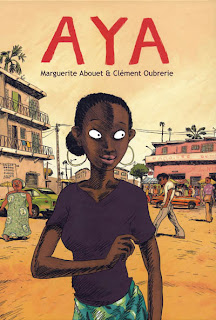 The tome in question is Aya, an album bande dessinée (that's a fancy French way of saying "comic book") by Ivorian writer Marguerite Abouet and French illustrator Clément Oubrerie. fleur d'Afrique actually hipped me to it about a year ago when it was awarded the prize for Best First Album at the prestigious Angoulême festival, and a second volume has since been published in France. Now, thanks to the good folks at Drawn & Quarterly, a sumptuous English translation has hit the shelves on this side of the Atlantic. Needless to say, you should probably take a peek at it, as it is some pretty darn nifty stuff. Trust thine own eyes more than mine impeccable taste and astute recommendation? Fine; take a look at a preview here. Still not convinced? There's some additional pages to be viewed here (they're en français but if you ask me, Oubrerie's shimmering, elastic linework is adequately expressive in just about any lingua you please).

Aya is a sweet and breezy yarn centering around the title character, a regular 19 year-old girl in late-1970s Abidjan, as she and her two friends Bintou and Adjoa grapple with weighty issues like overbearing parents, too-aggressive boys, sneaking out of the house at night to hit the club, how to perfectly roll your tassaba in that inimitable African woman fashion when you walk and trying to figure out just what you're going to do with the rest of your life... Basically, regular 19 year-old girl shit. Imagine John Hughes or the Hudlin Brothers' House Party in Africa. Or maybe even Valley Girl. And just like those great teen comedies of the 1980s and early '90s, it's fairly lightweight in the plot department but mines resonance from the humor and humanity of its characters.

But as I said before, a certain kind of western audience often has a hard time digesting humanity in African stories (Lord knows they can barely swallow even the idea of African humor). It's not their fault, really... They're just not that used to seeing African stories in which the characters are presented as actual people rather than as people-shaped embodiments of social problems. Africans are not really people to identify with; they're people to feel sorry for, or superior to (depending on the particular political and philosophical temperament of the individual viewer). Or maybe to kinda admire for their naive joy and resilience in the face of crushing hardship. Just about every review of this book I’ve read gushes with palpable amazement at the fact that its characters are, y’know, so goshdarn relatable! The preface to the English edition, contributed by one Alisia Grace Chase, PhD of the University of Minnesota, acknowledges as much in the very first sentence:

"The amorous hi-jinks narrated in Aya seem so familiar, so nearly suburban in their post-adolescent focus on dance-floor flirtations, awkward first dates, and finding just the right dress for a friend's wedding, that to many western readers it may be difficult to believe they take place in Africa."

(Can't you just see the reader choking and sputtering in shock: What the--??? Where's the genocide? Where's the female genital mutilation? The forced marriage? The babies for us to adopt? I mean, this story is supposed to be about Africa, right? But-but-but these characters seem not too different from me and my people! They even watch "Dallas" and "The Six Million Dollar Man" on TV! This shit is totally BLOWING MY MIND, man!)

Dr. Chase then rightly indicts the media for its role in shaping and perpetuating the stereotypical image of Africa in the western popular imagination:

"Inarguably, the western world is becoming increasingly aware of the myriad cultures on this massively diverse continent, but swollen bellied children, machete wielding janjaweeds and too many men and women dying of AIDS continue to comprise the majority of visual images that dominate the western media."

Which makes it all the more unfortunate that she seems to fall into the same trap herself. Maybe it's just me being my cynical self, but somehow, Chase's subsequent explanation of Aya's social context comes off to me almost as a disclaimer of sorts. Like the reason Aya is not a grim narrative of African suffering is because it takes place during the belle époque of President Félix Houphouët-Boigny's "economic miracle" that made Côte d'Ivoire one of the most prosperous and poltically stable countries south of the Sahara for thirty-some years, with then-capital Abidjan notching up a glamorous rep as "the Paris of Africa."

In other words, this story is an anomaly. An African Elseworlds. A brief, amusing curiosity before we return to our regularly scheduled programming of Unremitting Misery, Hopelessness and Horror® that is the African Reality™. I call bullcrap.

When Chase surmises that "Aya's dream of becoming a doctor, while dismissed by her conservative father, was very much a possibility" is she suggesting that it's not a possibility today? When she wistfully reflects that "Bintou's hip-bumping moves in the open-air maquis and Adjoua's make-out sessions at the '1000 Star Hotel' were commonplace teenage pleasures that took place in such working class suburbs as Yopougon" does Chase honestly believe - even in the wake of an interminable brutal civil war - that Ivorian teenagers are not doing the exact same thing right now? Is the idea that people still make love in Africa and not just war that far-fetched?

African pleasure. It's a concept so rare as to be mythological in an African cinema that is hellbent on catering to a western audience that seems to want Africa to function as a deep, dark, truthful mirror that reflects back to them just how good they have it. That wants Africa to always teach it something, much like the fabled "magical negroes" of Hollywood lore.

Sometimes I wonder if that has something to do with why the world cinema elite continues to ignore Nollywood: the fact that these crude movies' devotion to sheer pleasure somehow deprives them of gravitas in the eyes of the self-appointed arbiters of cinematic veracity. I mean, just the other day I was reading the latest issue of Sight & Sound (well... it's the latest issue on the stands here, anyway)... The African Cinema issue. Which manages to avoid mentioning Nollywood even once. Ain't that some shit?

Look... I know that there's more than enough issues surrounding Nollywood's almost characteristic crappy writing, hammy acting and general technical ineptitude to keep the British Film Institute from taking the Nigerian movie industry seriously. Hell, I could even understand how a fairly conservative org like the BFI might shy away from recognizing movies primarily shot and distributed on video as "cinema" in the first place. But to put together an issue surveying the state of filmmaking throughout the continent and make not even a cursory mention of the first far-reaching, self-sustaining, indigenously popular film industry in African history that produces movies that Africans actually watch? Especially when they see fit to devote like a whole two-page feature to "white conscience" pictures like Blood Diamond, The Last King of Scotland and Catch a Fire in which Africa serves as little more than an exotic backdrop for white people learning shit? Alas and alack, Sight & Sound! As quoth Jeru da Damaja: "Ya playin' yaself!"

Damn... I'm rambling (as usual). I didn't mean to do that, fam. Like I said, I just wanted to post some rants and raves. And now that we've gotten past the ranting, let's rave a little, shall we?

Go pick up Aya now and thank me later.

Take a look at the trailer:

That's all I'm really gonna say for now, because if I talk any more, I might have to start hating. Hard. Actually, I think it looks damn good and I'm just a little bit jealous. Nwanguma seems to have succeeded in conveying at least some of that dynamic Lagos energy and grit that is absent from virtually ALL Nollywood movies and which I'll admit we failed to adequately capture during our first foray into shooting TOO MUCH BEAUTIFUL WOMAN (I'm sure Denis would remark favorably upon the abundant yellow hues in the color palette!). So yeah... I guess this is all the more motivation to step up our game in the next round of shooting.

Apparently, Nwanguma & co. are trying to raise some finishing funds over on the Area Boys website. I found it somewhat interesting that they've actually posted up their proposed budget (nobody - and I mean nobody - discloses that information in Nollywood) and believe it or not, the amount of money they're spending on this one short is roughly as much as the budget for the a lot of 2-part Nollywood features. I'm glad they're not skimping on quality. I get really excited when I see cats trying to raise the bar for the nascent New African Cinema, so I'm totally rooting for them. If you're all about supporting quality African film by African filmmakers telling African stories for African audiences, by all means, stop by and show them some love.