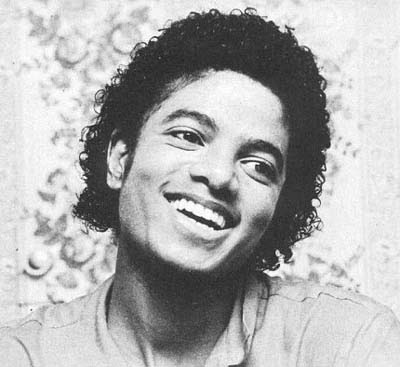 Between Farrah Fawcett and now this, it's like today's the day that all the pop culture icons of my formative life are being snuffed before my eyes. 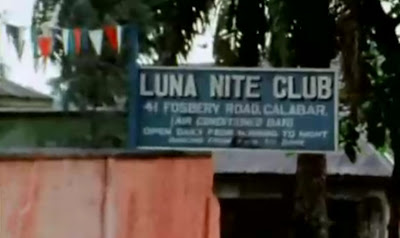 The photo above was grabbed from this video of Fela Ransome-Kuti performing at the famous Luna Nite Club in Calabar in 1971. I don't think I ever went to Luna; I was still in primary school during the club's glory days and even when I came of age, it wasn't really the kind of establishment I would frequent. For one thing, it was located in a slightly unsavory neck of the woods: the "Old Calabar" precinct that is now known as "Calabar South" and is today--as it was then--legendary for its rough characters. Among my middle-class stratum, we sometimes called this area "Target," a synecdoche referring to Target Street, one of the more rugged byways in that quarter of town. ("Target" was also an allusion to what an interloper might as well have his back wandering around that neighborhood after dark.) If someone owed you money or was messing with you, commissioning some thugs from "Target" to help you settle the score usually got the message across that you meant business.

Calabar had a spectrum of nightspots, with Paradise City on Atekong Drive representing the more upscale end and something like Hotel de Moon Rock on Mount Zion Road as the seedier extreme, but Luna was somewhere in the middle: a pleasure pit where you could relax, drink your Star or your Gulder and maybe enjoy some bushmeat--be it the kind that's bound with twine, soaked in tangy sauce and served with roasted plantains, or the variety that you might take back to one of the "chalets" behind the club that could be rented for a 30-minute "short-time" term ("bushmeat" being the local slang for a young woman who is relatively unsophisticated culturally and thus, is presumed to be reasonably available sexually).

If it was dancing you liked to dance, though, the big draw at Luna might have been the Anansa President, Bustic Kingsley Bassey, whose band was resident at the club for years. 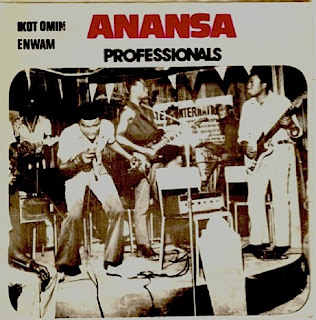 Bustic (or Burstic, same pronunciation) was a local legend but never made much of a splash on a national level. Truthfully, he was a bit of a journeyman. While he undoubtedly delivered rousing shows on the Luna stage, I don't think he ever really developed a distinctive sound of his own. The records I have heard from the late 1960s and very early 70s, for instance, capture Bustic performing in a style very reminiscent of Rex Lawson's "New Calabar" danceband highlife.

It would seem, though, that Fela's Luna performance left a significant impression on Bustic because shortly thereafter, he started calling himself the Chief Engineer and plying a heavily Fela-influenced afrobeat style, even mimicking the nuances of the Chief Priest's laid-back, delirious vocal style.

The two tracks below are from the 1975 LP Gossip, when Bustic was still in his deep Fela phase. 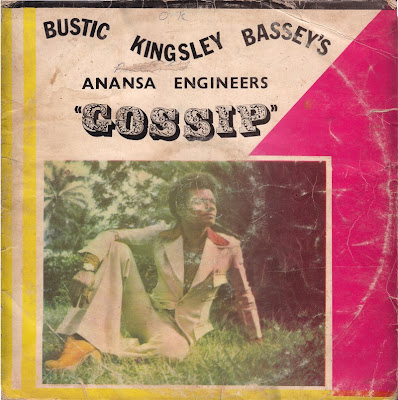 Facts of the Apostles 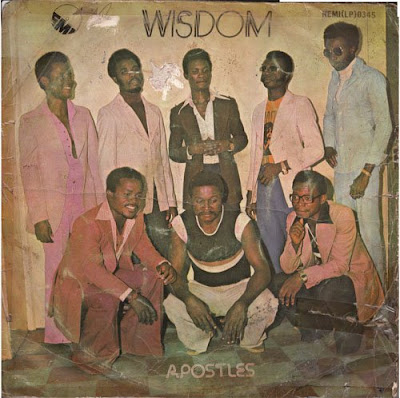 I almost forgot to mention: If you are in the market for some firsthand accounts of the 1970s Eastern Nigerian rock scene, then I'd suggest that you check out the podcast by my cousin Dr. Frederick Nwosu a.k.a. "Arthur Freds," who was a keyboardist in several Aba-based bands including The Friimen, The Sweet Unit/Rock of Ages Band, The Vibrations and Jerry Boifriand's Exodus Bolt Junction as well as occasionally sitting in with groups like The Apostles and the Sweet Breeze.

He often recounts some of his experiences in the Aba music scene on his blog and his podcast can be found HERE.

The next show will stream live tomorrow, Monday June 22, at 12 PM (ET) and the subject will be The Apostles.

EDIT: Or actually, it looks like the next episode will be on the Friimen Rock Company... The last episode (which you can listen to at the link above) talked about Apostles, but I thought he was going to continue with that this week.
Posted by Comb & Razor at 6/21/2009 06:11:00 PM 4 comments

SIDE 1
1. Come Again - Stephen Osadebe and his "Nigeria Sound Makers"
2. Kolowo Lode - Victor Olaiya and his "All Stars" 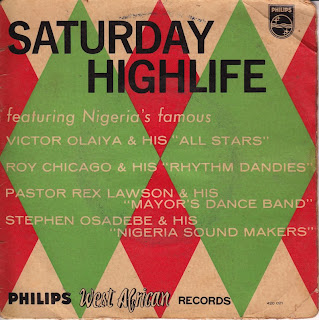 For all you electro-boogie heads, here's a nice nugget from 1984: "Don't You Know?" by Peter Abdul, produced by Odion Iruoje taking a stab at the Dizzy K. sound (note Nkono Teles' presence on keys). 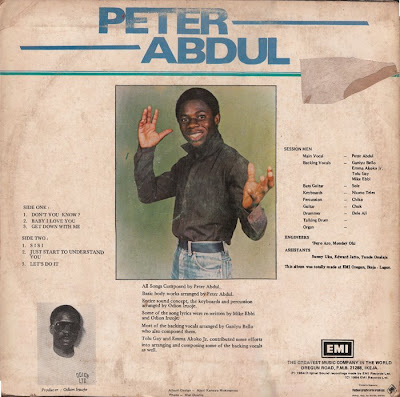 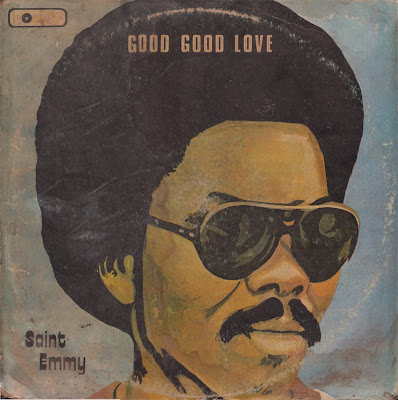 Saint Emmy - "Something Real, Something Good"

Saint Emmy started his career playing with Celestine Ukwu's Philosophers and other bands before going solo in the mid-70s. While he never really achieved major stardom on a national level, he remained a favorite in Eastern Nigeria, particularly in the fertile music scene of Enugu which included luminaries such as Nelly Uchendu, William Onyeabor and Goddy "Mr. Hygrades" Oku. This dubby track from his 1984 LP Good Good Love was recorded at Oku's Godiac Studio, backed by the Comrades Rock Group of Enugu. 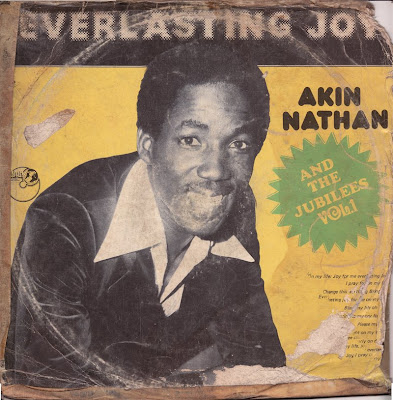 Akin Nathan was a seasoned session saxophonist who featured on several albums but is chiefly known for his tenure with Sonny Okosuns' Ozziddi during the group's most productive period in the 70s and 80s. Nathan's "Jubilees" on this 1980 solo outing include drummer Moses "Mosco" Egbe, guitarist Nelson Tackie, keyboard player Johnnie Woode Olimah and bassist Vincent Toko--all fellow members of Ozziddi. 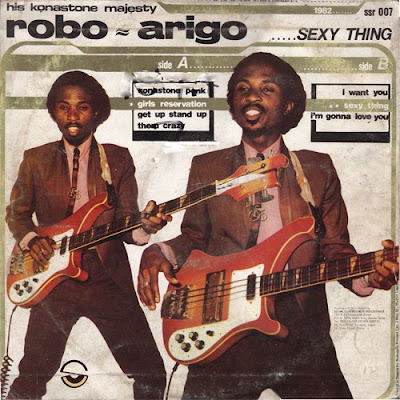 Robo Arigo's Sexy Thing album is in my opinion one of the rarest and most rewarding funk LPs of the 1980s. I like the rough and demo-ish quality of it, with his vocals mixed down low throughout to showcase his funky chops. The former Pogo Ltd. multi-instrumentalist went on to establish himself as an Nkono Teles-style super-producer with his Robbosoneex Music Company in Benin. 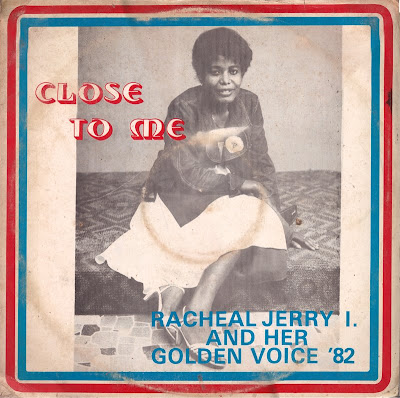 There's a certain earnestness and naivete to Racheal Jerry I.'s "I Want To Be a Star" that I find quite charming. The bio on her album sleeve recounts her struggle to make it in the music business through disappointment and exploitation before finally realizing the dream of cutting an album in Victor Uwaifo's Joromi Recording Studio, accompanied by his Titibiti Kings!

Racheal never really became a star, but her Close to Me was supposedly the first LP produced by a female artiste from Rivers State... so there's that. 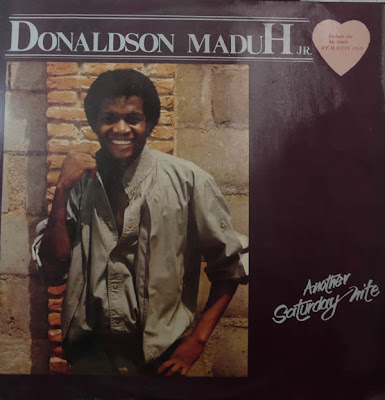 You might have heard this one on the last guest session I did over at Boogieheads. I call records like this "Dizzy K as genre"--high-pitched male singers over Afro-electro-disco tracks in the style of popular 80s star Dizzy K. Falola. The name is probably a bit of a misnomer as there were some common denominators to the style: most of these records were either produced by Dizzy K. producer Tony Okoroji, or featured multi-instrumentalist Nkono Teles, who played on most of Dizzy's records. Donaldson's 1986 record was actually produced by part-time Doves member Chuck Lygomm (who also played the guitars, Rhodes and synths) though Okoroji is thanked on the sleeve for "encouragement" and Dizzy K. himself contributes backing vocals.

And finally, another cut in a semi-Dizzy K. mold... 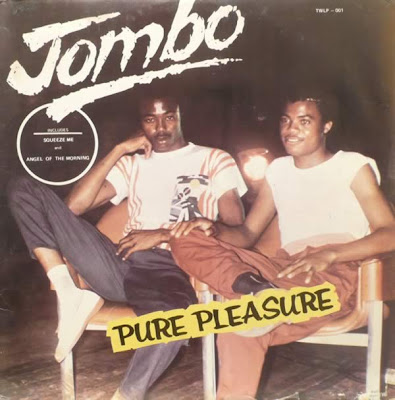 Gorgeous electro-boogie production by Nkono Teles. The singing is pretty dreadful of course, but you got a lot of that in the "private label" period of the 1980s. If the 1960s and 70s were the era of the professional musician and the big, seemingly impenetrable record companies, the 80s were a time when every youth wanted to make a record and if you could beg, borrow or steal enough money you didn't have to worry whether you had the talent or style to impress the suits at the big companies. You just made the trip to Lagos, Enugu or Onitsha and hooked up with a studio wizard like Teles, Jake Sollo or Sol "Tula" Owen, you booked your studio session, they cooked up some hot tracks for you and you did your awkward best over them in the time allotted. You pressed the record up yourself under your own banner, took it back home and got some regional radio and TV play. You got to be a local champion or a big shot at your school for a few months and then faded back into obscurity until twenty-some years later when some blogger cast a hazy spotlight on you once more. Maybe you can't exactly call it a career, but it's... something.
Posted by Comb & Razor at 6/09/2009 08:09:00 AM 19 comments

Time for some Actions! 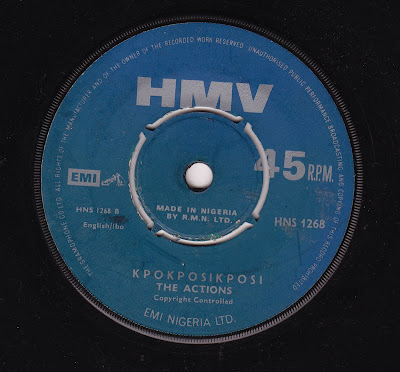 We've talked before about the Warri-based band Aktion (a.k.a. The Aktion Funk Ensemble) which started out as The Actions, one of the "army-entertaining" bands of the immediate post-civil war era. The members of the group included, at various points, leader Lemmy Faith, Essien Akpabio, Ben Alaka, Renny Pearl, Felix "Feladey" Odey and Tony Essien.

One of these days I'll figure out why many bands in the 1970s switched from standard "The" names to placing arbitrary numbers after their monikers, but just as The Heralds became Heralds 7 and The Founders became The Founders 15 (then Foundars 15 and finally Foundars XV), The Actions transformed into Action 13 before arriving at Aktion.

Aktion disbanded in the mid-70s, but the group's name lived on through Action Inn, a hotel Essien Akpabio established in the town of Ikot Ekpene. It was located around Ikot Ekpene-Aba Road, if I recall correctly; when I was in high school at Federal Government College, Ikot Ekpene more adventurous guys than myself would sneak off the school compound to hang out at Action and other joints like SUA International Guest House and drink beer, smoke cigarettes and mingle with ladies of dubious repute.