I'm a private person, so I have no interest in throwing wide the gates on my personal life, supplying the world with that much-needed minute-to-minute update on my mood and ephemeral thoughts or announcing the details of my lunch. As such, while I've been an early adopter of pretty much all the social networking sites as they've come out, I've generally had little use for them beyond keeping in touch with (while still maintaining a respectable distance from) a few high school friends and Internet acquaintances and occasionally trading a few yucks while watching award shows or some other trivial mess on TV.

I never understood the speculation that these sites would eventually become the future of all communication, eventually supplanting email, newspapers, magazines, blogs and even the more intelligent message boards; in fact, I actively resented such an idea. I still smh at the thought that something like a well-articulated, multi-dimensional album review could so easily become superfluous and obsolete amidst a torrent of hastily-ejaculated, 150-character blurbs.

But on the real... I'm starting to get the appeal. Through a somewhat serendipitous series of events, my Facebook page has over the past few days become a rather exciting hotbed of activity. Short version: I posted a few vintage Nigerian music photos as a lark, but the comments section on them soon went completely mad with all sorts of people posting memories and stories and with several veteran musicians like Tee Mac (AfroCollection, Tee Mac Connection), Jerri Jheto (The Mebusas, Ozziddi), Micro Mike (The Sunflowers and "The Black Mirrors"), Soga Benson and Skidd Ikemefuna (Grotto), Gboyega Adelaja and others chiming in to share interesting tales from their careers and commune with peers they've not spoken to in aeons.

It's been a lot of fun and I have to admit that I'm almost tempted to give up on this blog and shift operations to Facebook fulltime (I said "almost")! The only problem is that tending to the increased traffic on my Facebook account--processing an endless stream of new friend requests, moderating comments, replying to inquiries, tagging photos--has become pretty much a 24-hour job... At first I tried to herd it towards my Comb & Razor Sound group page but I found that it took away some of the interactivity as Facebook (ridiculously) does not notify group members--or even the group admin--when content on group pages is updated.

So I'd say just go to my (fairly impersonal) "personal" page and check out the "Random" album in the Photos tab, as well as the Videos tab where I have been posting some content as well. Also, scan the past few days' entries on the Wall as there have been some interesting discussions there, too. While I have tagged this post "shameless self-promotion," it's really not about that at all... I'm not trying to become a Facebook star or anything; I just feel there's been some pretty cool interaction going on there and I suspect some of you might want to join in.

If I'm right in thinking this, then go to Comb Razor on Facebook.

Some of y'all might know that I wrote the liner notes for Soundway Records' The World Ends: Afro Rock and Psychedelia in 1970s Nigeria. For that reason, Public Radio International's Global Hit program thought I might be a good person to chat with a little about the cultural context that informed the music.

In the meantime, check out this vid and enjoy the light-skinned gal's consistent overacting/dancing.

A couple of 1980s videos for the weekend

I've been slacking on the blog lately partly because I've been busy working on Now Again Records' upcoming Nigerian fuzz funk compilation and partly because I've been having trouble with my FTP since I've been back. The latter is also the reason my sparse updates have relied upon YouTube links, and I hope to resolve the issue soon and start getting some mp3s back up here. In the meantime, though, here are some more videos.

While the blog was on hiatus during my sojourn in Nigeria, I received a number of emails from a particularly insistent reader who wanted to me post the music videos of the 1980s kiddie-pop star, Yvonne Maha. Now as I've mentioned a few times in the past, it is nigh impossible to find pre-1990 music videos in Nigeria because at most television stations, if the humongous U-matic and Quad tapes on which they were stored that were not dubbed over with new content, they were thrown out wholesale to make room for new hardware. So I made no promises to find these videos, but I pledged to do my best.

As it turns out, the best I could do was to unearth this clip of Yvonne Maha appearing on The Bala Miller Show in 1983. I'd like to think that this also will at least partially please my girl Kelechi who requested some Bala Miller. (Don't worry, Kay; I'll be putting up some more Miller stuff a little later.)

Also, here is a 1981 promo (that's what we called music videos way back in the day) for Harry "Mr. Funkees" Mosco's Sugar Cane Baby, during his London period. The color's a bit messed up but that's because whoever digitized it didn't adjust the hue. It's still fun to watch, especially for its evocation of that innocent era when the music video was such a new invention and most performers had no inkling of how to comport their bodies or their faces in them. I mean, look at Harry's awkward shuffling, the band's hammy pretend-playing and the unabashed scenery chewing by the light-skinneded singer gal! I swear, she did that in all the videos Harry shot for this album (I remember there being three or four of them), even the ballad!

One Pound No Balance

It appears a lot of people enjoyed the clip from "The Stephen Osita Osadebe Show" I posted last week and want to see more.*

So here's some more.

I'm still posting these short clips on YouTube just for the sake of continuity (plus, somewhere deep down inside I probably want to be a YouTube star) but I'll soon start putting up longer versions on Dailymotion.

*What I found interesting though is that the clip of the much more obscure Golden Sounds I uploaded to YouTube on the same day has received well over two times the number of views of the Osadebe video--thanks probably to the World Cup-fueled renewed interest in "Zangalewa"/"Waka Waka." I really hope the Golden Sounds can harness this attention into a strong comeback!
Posted by Comb & Razor at 6/19/2010 05:01:00 PM 5 comments

I realize that it's been out for a while now but I heard Shakira's World Cup song "Waka Waka (This Time for Africa)" for the first time just the other day when she performed it at the kick-off concert.

While I usually like Shakira, I found this song to be pretty bland. But then again, that's probably exactly what you want from a would-be international anthem of this sort: enough of a catchy melody to stick in the world's collective memory but ultimately featureless enough that people of all nationalities, colors and creeds can project themselves into it.

What I found interesting about it was that the catchy part was an adaptation of a makossa song I remembered well from my youth: "Zangalewa," by the perennial Cameroonian national band, The Golden Sounds:

I really didn't know anything about The Golden Sounds when the song was first released in 1986--I'm not sure I even realized they were Cameroonian at the time. (What I really remember is the video activating my long-running interest in the history of minstrel-style comedy in Africa.) I didn't understand the Fang lyrics, so I had no idea they were singing about rowdy army recruits in colonial-era Cameroons and I don't think most Nigerian kids did either as they sang that zamina mina refrain as a stepping cadence during school march-past exhibitions and sporting events.

We definitely didn't know the extent to which the song had become a sensation all across the continent and even beyond, as it quickly became something of a standard on the champeta circuit and other African music-influenced scenes in Shakira's native Colombia. In 1988, it became a merengue hit when the all-female Las Chicas del Can from the Dominican Republic revamped it as "El Negro No Puede":

But while "Zangalewa" continues to exert its influence across South America, it's far from forgotten back home in Africa, as demonstrated by "Zamouna" from 2008, by Didier Awadi of the pioneering Senegalese hip-hop group Positive Black Soul:

Of course, I am far from the first to break the story behind "Waka Waka"; in fact, since Shakira's record dropped there's been a mini-Wimoweh-style shitstorm surrounding the song and the credit/royalties owed to the Golden Sounds. Apparently, steps are being taken to compensate the Sounds and the publicity has spurred the band (who disbanded, I think, in the early 2000s) to start contemplating a comeback. This is particularly good news to me, because underneath the buffoonery they were a pretty wicked performing outfit, as seen here in this snippet from their set at FESTAC '77 in Lagos:

What the whole "Waka Waka" story really leaves me thinking about, though, is the possibility that "Zangalewa" could be the most influential modern pop song from Africa, and more so than the oft-cited "Sweet Mother", it might be the true anthem of Africa. Which makes it all the more fitting that Shakira evoked it for this momentous event of the World Cup holding in Africa, doesn't it?

It's extremely rare to encounter live performance footage of Chief Stephen Osita Osadebe because like many musicians of his generation he guarded his music and his image jealously. He turned down most invitations to play on television and demanded exorbitant sums for the rights to film him in performance. However, in the early 1980s NTA 10 Lagos finally convinced the Doctor of Hypertension to do a weekly television half-hour show.

The program took the format of a live-in-studio Osadebe concert--no skits, no guest stars, no interviews, no chit-chat, no frills. Osadebe and the band would just perform two or three songs straight. The only variation would be when Chief would step off stage to let one of the other band members lead while he danced in the wings.

Here is an early rendition of the now-classic "Osondi Owendi." It's actually a bit longer than this but I had to get it to fit in at under 10 minutes in order to upload it on YouTube.

Would you believe me if I told you that the reason this page hasn't been updated in, oh, half a year is because I forgot my Blogger password?

It's actually true, you know... I've tried logging in several times over the past few months but I lost my key to my own blog and I eventually had to reset my Google password, which was no easy feat! But here I am... Feels a bit weird though; it's been like forever, hasn't it?

Anyway, I appreciate all the emails expressing curiosity, concern and even anger at my absence. I've been a bit busy so I haven't been able to reply all of them, but for those of you who didn't know, I've been in Nigeria for a while now doing some of this 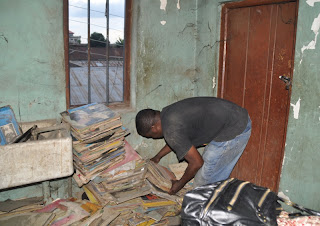 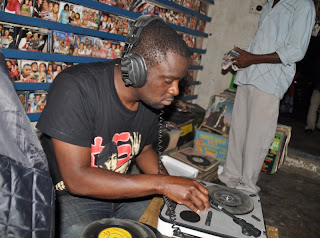 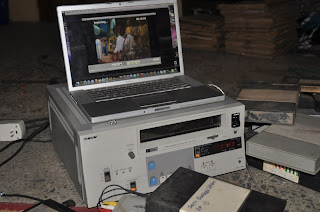 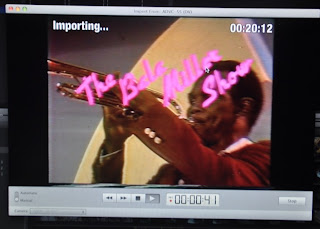 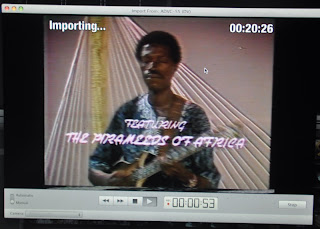 And a whole bunch of other stuff I'll tell you about later... Hopefully things will get pretty interesting around With Comb & Razorville in the next few months. Look for the blog to reactivate sometime in March; I need to get my act together a bit.

In the meantime, give me a shout in the comments if you care to... I miss interacting with you all!