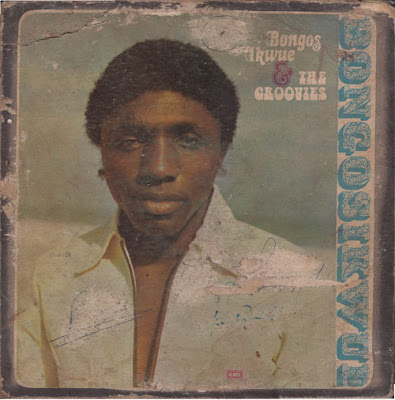 It's raining like the dickens here and there's a flood watch on, so it's not without a tinge of irony that I post today's funky nugget, "No More Water in the Well," by Bongos Ikwue & the Groovies.

Unlike most of the forgotten Nigerian musicians who eventually find their way onto this page, Bongos Ikwue is an artist whose name and music still resonate with a large portion of the Nigerian populace. Known primarily as the folky and philosophical troubadour behind sentimental favorites such as "Still Searching," "Sitting on the Beach" and "Cock Crow at Dawn," Ikwue is acclaimed as one of the most sensitive songsmiths in Nigeria's pop canon; many forget, though, that he started out as a righteous rocker.

Ikwue's 1973 debut, the heavily psychedelic You Can't Hurry the Sunrise (produced by Ginger Baker and Jide Alawiye), was one of the first releases from Baker's ARC label, but Ikwue soon signed up with EMI where he recorded a string of classic LPs through the 1970s (including the rarely-seen self-titled set from which today's track is taken).

Ikwue's star dimmed somewhat in the 1980s due to poor handling by his new label Tabansi, and a bit of embarrassment surrounding the widespread rumor that his calypso ballad "Mariama" had been addressed to the First Lady Maryam Babangida, with whom he had allegedly enjoyed a passionate affair in their younger days.

Bongos has since retired to his native Benue State where he has established himself as a magnate in construction and manufacturing. He has long promised a return to the music scene, though. In fact, I think I recall him featuring on a record with some rapper a few months ago and announcing that his new album was completed and would be out later this year. I sure hope it doesn't suck!

Bongos Ikwue & the Groovies - "No More Water in the Well"

Email ThisBlogThis!Share to TwitterShare to FacebookShare to Pinterest
Labels: Back in the Day, Bongos Ikwue, Naija jams 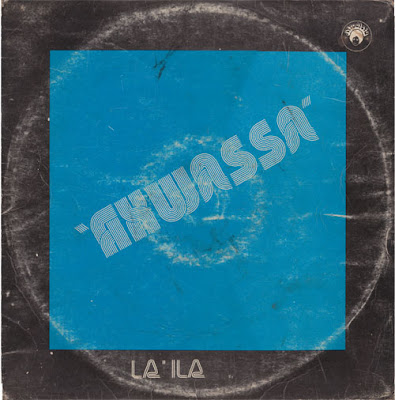 Ahh... How I love it when the pieces fall together!

La'ila by Akwassa, DWAPS 54, 1975. This is a record I've had for some time, featuring a band I've never heard of, so I was just about to throw up this post as yet another terse "I don't know nothing about this artist but ain't it sho nuff funky"-type comment. However, as I waited for the tracks to upload, I took a few moments to peruse the back cover... 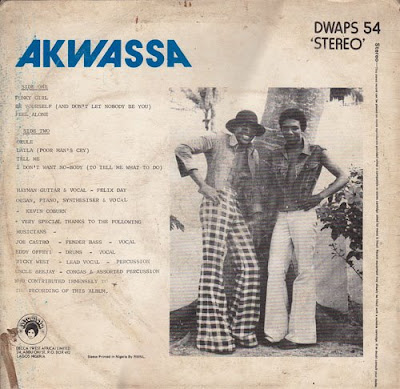 Akwassa--a mysterious duo made up of Felix Day (Hayman guitar & vocal) and Kevin Coburn (organ, piano, synthesizer & vocal). Never heard of either of them. These guys chose some... interesting stage names for themselves in those days, didn't they? "Kevin Coburn"? Sounds like the name of a late-1960s B-movie idol (or maybe a member of a C-list boy band from the 1990s). "Felix Day" isn't an altogether bad name, though... Has a ring to it... Felix Day... Felix Day....

Hmmm... That sounds a bit like Felix Odey, doesn't it? As in "Feladey," guitarist in the early-70s band Action 13, and later in Headzfunk and Bongos Ikwue's Groovies?

That would make sense, wouldn't it? Looking through the list of musicians who contributed to the album, apart from bassist Joe Castro the only name I recognize is Eddie Offeyi. I learned from our friend Seal67 (a close friend and occasional bandmate of Offeyi's) that Offeyi was the drummer in Headzfunk, so that's another connection right there. 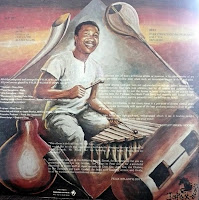 By now, I'm pretty much convinced, but just to be completely sure, let's examine the available physical evidence, shall we? The only picture of Feladey I have on hand is the painting of him featured on the back cover of his 1985 album with the Jap Band, Japadodo (right). Let's compare that with the photo on the back of the La'ila LP: 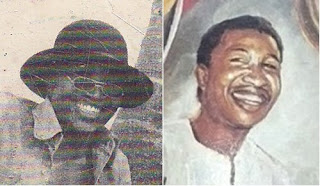 I'd say there's a likeness!

Alright, so considering that this album was released in 1975, as was Aktion's Groove the Funk (which was recorded right after the dissolution of Action 13), that would mean Akwassa was a short-lived project Feladey was involved with between Action 13 and Headzfunk.

(By the way, I think the use of the synthesizer on this album sounds pretty far out for 1975... I wonder who this Kevin Coburn character is; he couldn't have just dropped off the scene completely. Maybe he changed his nom de rock?)

Well... Perhaps Seal67 knows something about all this. Or maybe we can get in touch with Feladey himself; he's still active in the industry as an artist (mainly in the gospel idiom), producer, manager and general music advocate.

(Sorry for the little geek-out, y'all... Here's some music.) 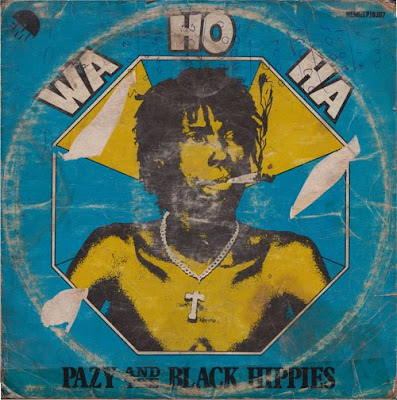 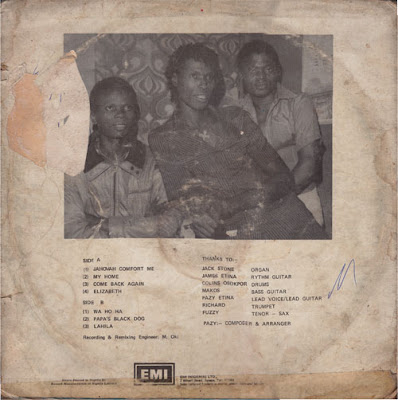 Email ThisBlogThis!Share to TwitterShare to FacebookShare to Pinterest
Labels: Back in the Day, Naija jams, Pazy and the Black Hippies

Another artist I know absolutely nothing about. The album has a bunch of great musicians on it, though: the ebullient Mambo on drums, the ever-reliable Eddy Pollo on tenor guitar, the modest Eugene Ndema on rhythm, the aptly-named Soul on bass, the whiz kid Nkono Teles on keys and the underrated Eric Kol on background vocals... all pulled together by master producer Odion Iruoje.

Not too sure what "Burden Star" means, either; I thought it was "budding star." Oh well... Either way, it's a pretty cool track, I think. 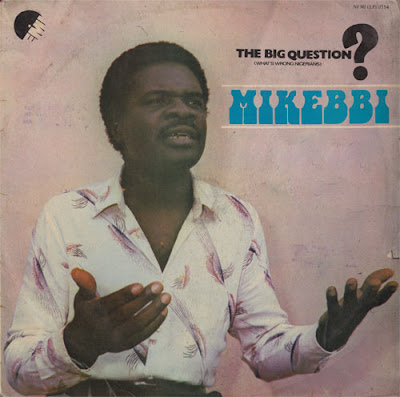 Email ThisBlogThis!Share to TwitterShare to FacebookShare to Pinterest
Labels: Back in the Day, Mikebbi, Naija jams

Another mystery artist. I know nothing of this Sunny White or the Clinks. Nor am I familiar with any of the names in the list of musicians who played on the record (with the exception of saxophonist Fuzzy Gbagi Alto, who seems to have played on the similarly obscure Wa Ho Ha, by Pazy and the Black Hippies--more on that later).

Although I'm guessing this record is from some time between 1980 and 1983 (since the credits have it being recorded at Phonodisc Studios), the title track is on some throwback 1960 Stax tip.


Sunny White and the Clinks - "Rock On Your Feet" 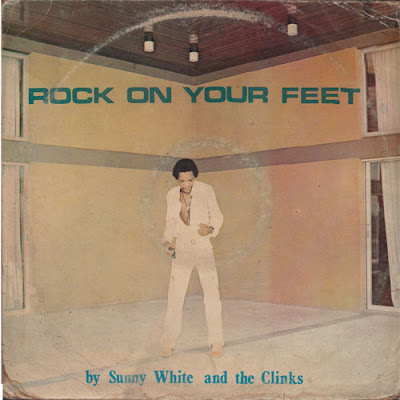 Email ThisBlogThis!Share to TwitterShare to FacebookShare to Pinterest
Labels: Back in the Day, Naija jams, Sunny White

Who is Tony Barrett?

I feel like I should know who he is... The name does activate distant bells in my head... But I don't know; a handle like "Tony Barrett" could belong to any number of obscure soul, reggae or calypso singers.

(Yes, I realize the sleeve says "Tony Barreth," but the spelling on the label, Barrett, seems more likely to be correct and so I'm going to go with that.)

I do, however, know the band that backs Barrett on this 1977 soul workout--Samuel Abiloye Esse, Johnnie Woode Olimah, Ottay Hima Blackie and Bola Prince, better known as the SJOB (or S-Job) Movement. 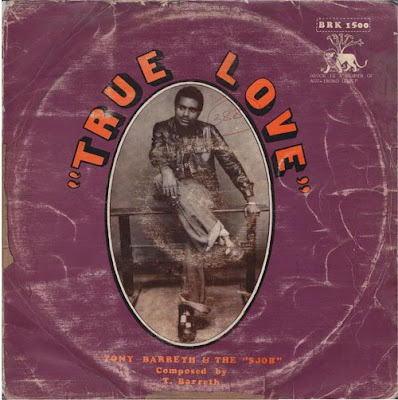 Email ThisBlogThis!Share to TwitterShare to FacebookShare to Pinterest
Labels: Back in the Day, Naija jams, SJOB, Tony Barrett 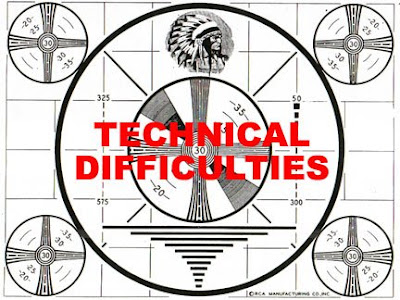 Yeah, I've been back in the States a few days now, but I'm probably gonna lie low for a bit while I try to get a new scanner and iron out a couple of other computer-related snafus. I should have that biz squared away by some time next week.

In the meantime, check out this video by my current favorite Nigerian MC, M.I.:

It's actually almost a year old, but it's new to me... I've had a somewhat ambivalent attitude toward Nigerian rap over the past decade and a half, and I guess I still do. But I'd say 2008 has been the year that hip-hop truly came of age in Nigeria, for better or worse. M.I. is part of the "better," I think; his whole style reminds me of stalwarts of the "Golden Age of Hip-Hop" that molded me--Brand Nubian, YZ, Ed OG, Chubb Rock, Masta Ace... and dare I even invoke the God Rakim Allah?