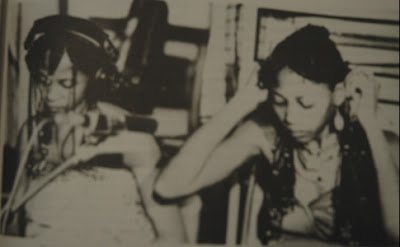 Continuing the feature on the Lijadu Sisters...

The video clips in this post come from Konkombe: The Nigerian Pop Music Scene, an installment in English filmmaker Jeremy Marre's excellent 14-part Beats of the Heart series that ran on PBS in 1988 and helped spur the explosion of the "World Music" (HATE that term) market. (I still haven't seen the entire series, but the episodes on Jamaica, Brazil, Bollywood, South Africa and Nuyoriquien salsa are all top-notch. Do check them out if you can.)

The Nigeria episode featured King Sunny Ade being sprayed with naira notes as he performs at an owambe party, Fela lounging in his draws in a cramped flat after the destruction of Kalakuta, surrounded by his aloof and beautiful queens, Sonny Okosun (not yet Okosuns) basking in his pop ascendancy, juju pioneer I.K. Dairo leading the congregation in song at his "white garment" church, transvestite Igbo musician Area Scatter, Lagos street minstrels, Eastern guitar band highlife superstars The Oriental Brothers rocking a party, Hausa musicians in the Saharan North and, most memorably, the Lijadu Sisters engaged in an impromptu open-air rehearsal session:

Odion Iruoje comes off as a bit of a prick, doesn't he?

You know... I actually don't know what album they are recording here. While this documentary aired in 1988, I'm guessing that this footage was shot 1979 or 80, ie around the time of Horizon Unlimited. At one time, I thought that it actually was Horizon Unlimited they're working on; after all, it's got similar neo-juju production with the talking drums and Hawaiian guitars and all that. But co-producers Laolu Akins and Berkley Jones are nowhere to be seen in that clip, Horizon Unlimited was recorded at Decca's London studios rather than their Lagos ones, and the songs they're singing don't appear on Horizon Unlimited. (That "Gberu o" song they're singing does sound like "Gbowo Mi" with different lyrics, though... Could it be that Taiwo and Kehinde worked out the basic material with Iruoje in Lagos and then finished it up with Jones and Akins in London?)

The appearance in the Beats of the Heart doc - along with the release of Double Trouble and an appearance on the legendary BBC 4 music show The Tube (which I'm still trying to find a clip of) seemed to signal that the Lijadus' star was a-rising on the international horizon. But alas, it didn't really happen and they disappeared from the scene. A few of their songs showed on various compilations over the years (with "Orere Elejigbo" being the most frequent selection), amassing a cult following, thirsty to hear more from the twins.

By all accounts, Taiwo and Kehinde have been living in Brooklyn, New York for the past several years and while they are officially retired from showbiz, they mentor young artists. I heard a rumor a while back that one of the twins sufferred a spinal injury of some sort and was wheelchair-bound. I don't know if there's any credence to that, though, especially since I've also heard that they still occasionally perform at festivals and Nigerian events in New York.

Here's a photo I found from some Nigerian-American organizations award ceremony at which Taiwo and Kehinde were honored in late 2005. Does it look like they're standing or sitting? (I'm going to link the photo here rather than actually posting it so's I don't get in trouble).

(To be honest, I probably wouldn't recognize these two nice ladies as Taiwo and Kehinde Lijadu if i ran into them at the tropical foods market on a Sunday afternoon, but hey... I don't look nothing like I did 25 years ago, either.)

Anyway, is this post already too long? I originally intended to reproduce Tunde Harrison's sleeve notes from Horizon Unlimited, which feature a chat with the twins delineating some of their background and showcasing their playful wit. But then I realized that it might be easier for you to read (and and for me to transcribe) if I just condensed it to Q&A format as my people at Naija Jams did in their Lijadu Sisters feature a while back. Then I realized that it would be even easier for me to just copy it wholesale from over there and paste it over here. So that's what I did:

Whenever Kehinde and Taiwo Lijadu felt low down in spirit they indulged themselves in a childhood prank. They climbed the tallest nearest tree and watched the unlimited horizon. That was not the only trait they shared in common. They are identical twins who also share identical callings, habits, hobbies, a joint bank account and four children in between them. They never tell which one of them is the mother to which child. “They are four children,” they always said when asked.

Some twelve years ago (approx: 1967) they climbed a very tall tree and saw in the horizon unlimited, the path of their future.

The elements were orchestrating sweet musical vibrations that hit the core of the very being of the twins. It was the climax of their long-standing yearning to become professional singers. After all, it was all in the family. Daddy played the piano and Granny (on dad’s side) played the guitar. “So what about that?” They asked themselves.

They had enough inspirational heat in their veins to generate and power their interest and enthusiasm.

There was Daddy and Granny. There was Aretha Franklin and I.K. Dairo. There was Miriam Makeba and Victor Olaiya.

There was Fela Anikulapo-Kuti and a host of other musicians both local and international.

All of them together gave them all the heat of their inspiration. At such times when they were inspired it did not matter who conceived the ideas for lyrics or musical compositions.

What mattered was that they laboured together to bring forth the best of their brainchild.

The happiest moment that ever crowned their first attempt at creativity was when they walked into the chambers of Decca Studios with a handful of competent veteran session (musicians) to vax their first LP, “Iya Mi Jowo.” That was 1969. Since then Kehinde and Taiwo, (christened Louisa and Rosaline) have come a long way.

Over the years they have conceived created and recorded four long playing records all on Decca labels.

There was “Sunshine” and “Danger,” “Mother Africa” and “Iya mi Jowo” which have all gone down to their credit in the history books of the Nigerian music scene, amongst them a silver disk winner. This album is another step towards the fulfillment of the vision had of their future, many many years ago.

That vision they had of the “horizon unlimited.”

Ironically with Lijadu Sisters do not always speak about their future.

A reporter once asked them: Now that your horizon is opening up, what plans do you have for your future?

Lijadu Sisters: We don’t always look beyond our noses, because Man proposes but God disposes, but we are optimists.

R: Are you as rich as you are famous?
LS: As rich as rich can be. We are comfortable. We own one Volkswagen beetle and a joint bank account with plenty of money in it. Most of the time we are broke.

R: Are you religious?
LS: Very. We are catholics although not the Church going type. Every time we feel the spirit moving in our hearts we walk into the nearest church or Mosque and pray.

R: Do you have lovers?
LS: We are not dead. Not yet. We are living beings. To live and to love is the essence of our life. If you don’t have someone who loves you, you are dead. If we didn’t have lovers how come we compose love songs?

R: Do you take drugs?
LS: NO. We are permanently high.

R: You said you have four children but you are not married.
LS: We are not baby killers. Just because we had children with men we never got married to does not mean we had to kill them. We love children because children are a gift from God.

R: Would you have the same lover?
LS: If we did, we don’t see the need for it because there are many eligible men around. Even though we are twins, we want to be exclusive.

R: What do you think of yourselves?
LS: We are fantastic.

R: Do you wear the same clothes?
Kehinde: Taiwo is wearing my blouse and I’m wearing her wrapper.

R: What do you do when not singing?
LS: Playing with our kids, cooking, painting or climbing trees.

R: What kind of men would you like as friends?
LS: Simple, intelligent and responsible men.

Email ThisBlogThis!Share to TwitterShare to FacebookShare to Pinterest
Labels: Back in the Day, Lijadu Sisters, Naija jams

great stuff you got going on here. loving it. peace

thaanks, ms b! you know you mostly inspired it!

(and i still haven't forgotten your DVD, either! i'm just having some serious hard drive issues right now... hopefully they'll be resolved within the next week, though)

The Lijadu sisters are great, I got into them via the no condition is permanent blog and the LP double trouble. Thanks!
Chris Ward
Nottingham - UK

thanks for commenting, Chris!

yeah... to be honest, the post on No Condition is Permanent is where i stole these mp3s from!

but i'm gonna be putting up some more of their music later in the week. (hmmm.... we're already halfway through the week, aren't we? okay, let's say "tomorrow"!)

Thank you thank you o boss for your geeky attention to detail and general love of afro music and what it really means. More commentators like you have to be on the mainstream scene here in Europe where we are being told what is good by people who write about African music like they discovered it. Thanx for introducing me to the beautiful Lijadu sisters...god they rocked...I have watched all the clips and read all the references,some familiar and some not (but i enjoyed it all) with regards to thier influences...you na di Oga
Victor lewis