So I think I finally got this whole recording from vinyl thing figured out... I'm not yet in possession of the best hardware I could possibly have, but I have a more or less functional setup for now. What I have found myself lacking now, though, is the time. Denis and I have been sliding back into serious pre-production on Phase II of TOO MUCH BEAUTIFUL WOMAN (ha! must be a millennium since your man typed that majestically majuscular marquee-filler 'pon this page!) so setting up the turntable, making sure the records play through without skips, then editing the AIFFs and converting them to mp3s is just not something I can dedicate myself to at the moment.

Thank God for John B.

Our man has been lacing me up with a steady stream of music to post up here (did I just say "lacing me up"? Does anybody actually still use that term? Man, the 90s feel like such a long time ago!) and today we have another Fela rarity: 1986's I GO SHOUT PLENTY!!!

You'll notice that despite being released during the Egypt 80 era, the record is credited to "Fela and Afrika '70"... That's because the I GO SHOUT PLENTY!!! LP was actually recorded in 1977 (with "Frustration of My Lady" on the B side) but went unreleased for nine years until Decca chose to put it out without Fela's permission. The new B side, "Why Black Man Dey Suffer" was recorded for a 1977 album of the same name (with "Male" on the B side) but was also shelved by Decca.

(You might have seen a slightly bootleg-looking CD in the market called Why Black Man Dey Suffer, with "Ikoyi Mentality Versus Mushin Mentality " on the B side. That's a completely different version on a different LP recorded in 1971 for EMI; they didn't release it, so it came out under the African Songs label. Confusion break bone!)

I uploaded this clip yesterday because I had planned to talk up this theory Denis has about Fela and politics: He says that while Fela was generally thought of by most people (including himself) as a "political" artist, he was really more of a satirist, and the deeper he got into politics, the more detrimental it was to his music. It alienated a lot of his fans in the 80s, and it definitely pushed away his musicians, leading to the Afrika 70 mutiny.

We'll talk about that later, though.

Interesting thing, though: When I uploaded this clip, Dele Sosimi, with whom I had been chatting online earlier that day, messaged me to tell me that he was the skinny youth you see sitting in a chair leafing through a book. I asked him what the hell he was doing flipping through the pages so fast, like, was he really reading it or just playing to the camera? Turns out it was a book on jazz improvisation and he was trying to memorize some licks! That kinda surprised me because I really didn't know that any of Fela's musicians were, you know, musically literate (especially not the Egypt 80 players, who were generally younger and less experienced than the Afrika 70). 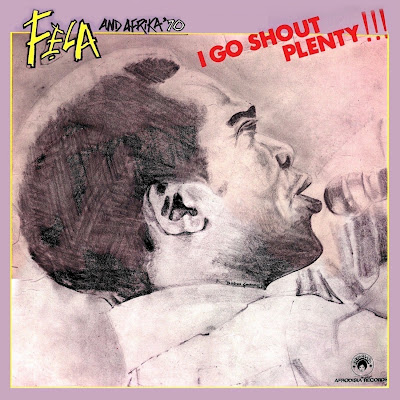 Email ThisBlogThis!Share to TwitterShare to FacebookShare to Pinterest
Labels: Back in the Day, Fela, Naija jams

Am I the only one who's having trouble with the Divshare link?

no, you are not.... i was having trouble with DivShare last night and it took several attempts before i could get on.

tried again this morning and it was just straight impossible to access the site.

hopefully, this shall pass.

I have just added your blog to a collection of all Nigerian blogs which I am currently building and which can be found here: The Nigerian Super Blog . On the site you will be able to read posts from 197 Nigerian blogs ALL from one place (this number will increase as we continue to add new blog feeds).

The preview version of The Nigerian Super Blog was launched on the 1st of July 2007 and the site is still very much in active development (thus you might experience a bug here and there). We'd be happy if you can find time to check it out (I promise you are going to love it because you will be able to read all your favorite blogs and more from one place!). Plus it will help much more people to find and enjoy your blog.

We'd also appreciate any kind of feedback, (blogs @ naijalive . net) and possibly a post about us. and if you really like the site, please tell people about it and add a link to us in your blog.

Other ways you may support this FREE project is by helping us with links or pointers to Nigerian blogs so that we can add them if they are not already there.

Thanks a lot and keep up the good work!

thanks a lot, Tony!

to be honest, i had actively attempted to get myself added to a few of the Naija blogrolls/aggregators at some point, but they never showed me any love... i just assumed that i wasn't cool enough for them!

Thank you very much for this rarity! Over the years my musical taste has expanded and evolved greatly to encompasse all sorts of musics I never really knew too much about. My Fela knowledge, up until last year was confined to Zombie and He Miss Road, now I can't wait to discover the next revelation!

glad to be of service, dave... thanks for checking us out!

i've linked to your blogpost at the african music thread at sfrp:
http://tinyurl.com/3yvc8f

looks like i have to register just to take a look at it, though...

sorry i forgot.. you have to register, but it is fun...

Love Fela and Afrika70 and love the blog.Thanx for keepin it funky!
chronwell08