In addition to being one of the flashiest and hardest working Nigerian musicians of the highlife era, Sir Victor Uwaifo was almost certainly the most ingenious. Never content to follow the boilerplate of the highlife mainstream or to slavishly ape imported trends, Uwaifo built his reputation on ostentatious showmanship and the judicious mining of the legends and songs of his native Edo culture, which he repackaged as newfangled pop: modern music of African folklore. 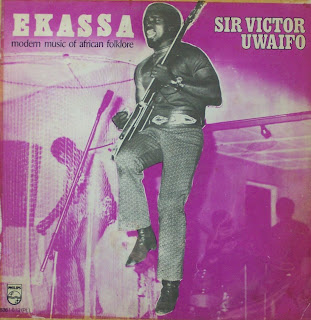 Victor Uwaifo was born in Benin City in 1941. Like Fela, he was born into a family that placed a high premium on education and achievement. As a child, he showed precocious talent in athletics, art and engineering, constructing intricate toy cars and airplanes and even a guitar that used high-tension wires for strings and bicycle spokes for frets. Much to his father's disapproval, he had a "drinkard" at the tavern tune the guitar in exchange for a jug of palmwine, got himself a book on music theory and started teaching himself to play.

In his teens, he was sent off to Lagos to attend the prestigious St. Gregory's College (which later produced bands like Ofege and Grotto), where his time was split between studying, sports, playing with the school band and apprenticing with "the evil genius of highlife," Victor Olaiya and his All-Stars. Upon graduating from Greg's, he won a scholarship to Yaba College of Technology where he studied graphic arts by day and played with dance bandleader E.C. Arinze by night.

After leaving YabaTech in 1964, he took a job working as a graphic artist at NTV Channel 10 in Lagos and formed a band called the New Melodies with whom he performed Bini folk songs. It was during this period, he has long maintained, that he encountered a mami wata, or mermaid, while lounging on Bar Beach. The experience inspired the song "Guitar Boy & Mamywater," a massive hit for Uwaifo's renamed Melody Maestroes.

Another early hit was "Joromi," a dance number that retold the Bini legend of a swaggering wrestler who dared to wrestle spirits and demons in the afterlife and became the first certified gold record in Africa. Uwaifo continued his pattern of drawing from Edo folklore to create custom pop sounds like akwete, mutaba, sassakossa and of course, ekassa.

Uwaifo explained the his modern articulation of the ekassa in John Collins' Musicmakers of West Africa:

In fact I wouldn't say I created Ekassa as it was already here as an indigenous dance of Benin. It was a royal dance performed during the coronation of a new king. Some people thought it an abomination to hear "ekassa" while the king was still alive, but I didn't mind them as the first tune was a brilliant hit and others followed. Ekassa incorporates the beat of the tom-tom and agba drums, Western wind instruments, two guitars and, of course, me on the guitar singing in the Edo language.

Uwaifo rode the style for four or five years, releasing four longplaying Ekassa volumes and several singles between 1971 and 1975.

As might be expected, Uwaifo's appropriation of ancient, and in some cases sacred, songs for the purposes of contemporary dancehall debauchery did not always go down well with the self-appointed guardians of the legacy of the great Benin Empire, but Uwaifo viewed his work as that of a high-tech curator:

They fail to see the foundation of my music is very cultural, as demonstrated in the beat and the lyrics. The fact that I use modern instruments to produce my sound has not altered the basic character of the music, otherwise we might as well argue that a historian writing ancient history with modern tools, like a Parker pen and paper, is a farce. The tools he uses to write history will not alter the facts and dates of the book. We have experimentation and evolution of ancient African cultures and my music is no exception to this.

Victor Uwaifo went on to build hotels and a TV studio, went back to school and got a master's degree in sculpture, established himself as a renowned visual artist, served as a professor at the University of Benin and a commissioner in Edo State, and he still performs regularly. His proteges and followers have included musicians from the Midwest such as Sonny Okosuns, Aigbe and Felix Lebarty and Sir Patrick Idahosa. Still, in characteristic cocky form, Uwaifo shrugs off the idea of naming a successor; even as he continues to refurbish the ancient mythos of Benin, his favorite mythology is that of Sir Victor Uwaifo himself:

Since I don’t believe that a genius ever has a successor, I don’t expect any of my children to succeed me. Let’s compare notes: Shakespeare, Isaac Newton, Michael Faraday, John Stevenson, did anyone ever succeed them? And back home, has Ghana or Africa ever found another Nkrumah? I am a rare specie, and it’s very unlikely that anyone will ever succeed me. If that happens, then I do not rate a genius.

I am not bothered by this. Even if I get a successor musically what about other fields where I also excelled? I am a writer, publisher, philosopher, a scientist, a painter, sculptor and a musician that plays several musical instruments. I remain the only musician today who invented a double-necked guitar, designed and built his own car. And above all these, I’m still alive. I’m yet to see anyone capable of succeeding me.*

Sir Victor Uwaifo: there can be only one!

(And massive big ups to another singular gentleman: our good friend Zim, who niced us up with this this nicety!) 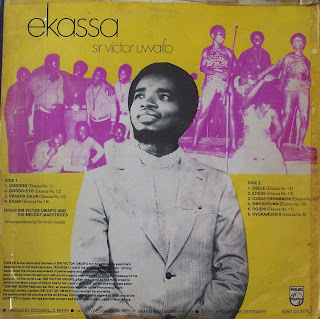 Email ThisBlogThis!Share to TwitterShare to FacebookShare to Pinterest
Labels: Back in the Day, Naija jams, Sir Victor Uwaifo

I love his arrogance.

usually, i would regard that kind of thing as obnoxious, but with Uwaifo it just comes off as supreme confidence and competence.

Awesome! Can't wait to hear this. The last one was a mighty banger indeed. Can't believe he built his own car...

What a guy! Like with Muhammed Ali, you just feel you have to believe him, coz he's probably telling the simple truth. Who needs false modesty ;-) Thanks for this new year present C&R.
cheers,
Jon

More i listen this disc, more i like it! Thank you so much! Happy new year , blah, blah, blah, thanks again...
Best.
Aduna

always a joy to see you, Aduna!

(now if you would just update your blog more often---!!!)

Thanks for these rare Uwaifo recordings. I love most of the stuff you post on here, and would have no other way to hear them. How much of this type of stuff do you have- afro-beat- afro-psych?

glad you're liking it, Kevin...

how much of that kinda stuff do i have? hmmmm... hard to say. i have quite a bit of stuff, but oftentimes it takes a while to figure out what is in good enough condition to post!

forego is my witness said...

My copy of this record is only VG+ at best. To have it in sparkling fashion has made my day!! THANK YOU! This is one of my favorite discs of all time!