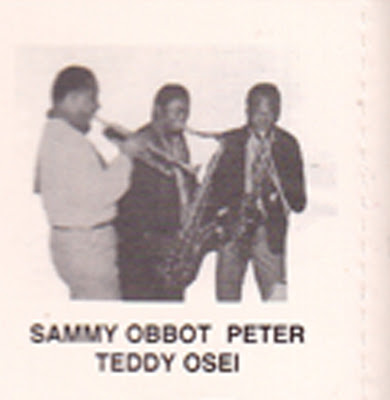 As I said in my last post, the Ghanaian dance bands of the 1950s and 60s tended to have little confidence in the trumpet-playing abilities of their countrymen and so often hired Nigerian trumpeters instead. Many of these trumpeters came from the Calabar area, which was noted for its brass band tradition. The greatest and most influential of these Calabar trumpeters was probably Sammy Obot.

Samuel Obot started his career in 1944 as a member of the Nigeria Police Band in Lagos. He then moved to Port Harcourt where he fronted his own band for the next couple of years. A teenaged trumpeter named Erekisoma "Rex" Lawson apprenticed with him, learning from Obot the expressive, muted tone that would become his trademark as one of the most popular highlife stars of the 1960s. Other musicians who studied the trumpet under Obot included Victor Olaiya and Sam Akpabot.

Obot then moved up north to Kano, where he led the Rendezvous Dance Band featuring Efik singer Inyang Nta Henshaw, who was one of the most popular musicians in Northern Nigeria. As the Gold Coast approached independence in 1957, Obot moved to Ghana and founded the Broadway Dance Band. 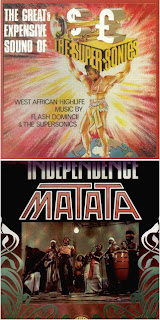 Obot led the Broadway Dance Band as they played at the independence ball and soon became the unofficial national orchestra of Ghana, performing at state functions and accompanying Kwame Nkrumah on presidential trips. In 1964, the Broadway Dance Band changed its name to the Uhuru Dance Band; Obot handed leadership of the band over to Stan Plange the following year and moved to London where he participated in the local black music scene and studied at the Eric Guilder School of Music. Notable sessions he played on during this period include Flash Domincii's The Great and Expensive Sound of the Supersonics in 1967 and 1974's Independence, by afrofunk band Matata.

Obot returned to Nigeria in the 1970s and continued to perform until 1985 when he released the first (and to my knowledge, only) album under his own name, I Believe in Music, issued on the private Sagata label.

Looking at the record sleeve now, I'm amused to note that Sagata Records International's main office address is given as "55B School Road, Housing Estate, Calabar"; this was the home address of my across-the-street neighbor, Calabar businessman Chief T.A. Obot. While this record was released about two years before we moved there, I had always had a couple of friends who lived in that neighborhood and so I hung out around there a lot.

The Obot residence was a big white house surrounded by an intimidating wall. Chief Obot's daughter Lucy went to the same primary school as us, and everybody thought she was kind of stuck up. I do recall hearing that the famous old-time musician Sammy Obot was her uncle and seeing her in the "I Believe in Music" video (shot in the University of Calabar staff quarters, where I did live at the time). I thought that she thought she was all that. In retrospect, I guess she was just really sheltered; almost nobody was allowed into their compound unless you were going into Luciana Hair Salon (the small beauty parlor Mrs. Obot ran out of an extension at the front of the house; my sisters used to get their hair relaxed there occasionally, but not too often because Luciana seemed to be more expensive than most other salons and kind of cliquish, too), and I don't think she was encouraged to play with other kids in the neighborhood, even though she clearly wanted to.

Taking what I know about the Obots' business instincts into account, I can imagine that the goal was for the record to appeal to as wide (and young) of an audience as possible, and so they contracted the hottest producer in Nigeria for the job. And instead of Sammy Obot's familiar dance band highlife you get Jake Sollo's late-period technofunk, with Obot singing in Efik and English.

The sleeve shows Obot brandishing his axe, but he doesn't play a single note on the entire album. What little trumpet there is, is credited to Roxy Edet; Jake Sollo handles synth sax and all other synthesizers, programming and arrangements. The rest of the musical crew is made up of regular session players associated with Sollo productions during his Onitsha/Awka period: guitarist Eddy "Pollo" Neesackey, bassist Ernest Mensah, and background vocalists Veno Marioghae, Al Jackson Nnakwe, Mary Udekwu, Nkem "Ozzobia" Njoku and Murphy Williams (formerly of Apostles of Aba).

Taken all together, it adds up to a rather... interesting musical experience. I'll admit that it's somewhat surreal hearing one of the legends of dance band highlife singing an interpolation of "Don't Look Any Further" on "Mbon Sca Re," but it's not like he abandons his roots completely--if you listen closely to the title track, you might notice that underneath the glossy synth production, it's an old-fashioned highlife in the Ghanaian style, with the double handclaps and the palm wine guitar licks. (Perhaps it qualifies as burger highlife?)

I'm not sure how I Believe in Music was received in the rest of the country, but I can say with certainty that it got a lot of play in Calabar and became something of a sentimental classic. When I found this record last summer, even Koko--Koko, who usually resents my obsession with tracking down these old records--cackled with delight when I brought it back the house and listened to it from beginning to end, singing along gleefully. 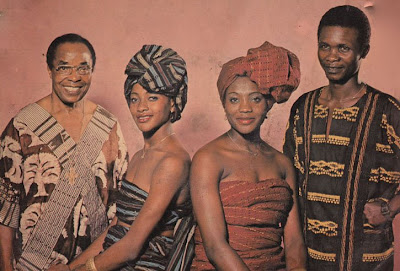 I don't know if Sammy Obot is still around and/or active, but big ups to the master!

(I apologize for the roughness of these tracks, but just look at the sleeve and believe me when I tell you I literally dug it out of the ground.)

EDIT: There was some sloppy editing at the beginning and end of "Edue Ukot Akpa Itong," but I've fixed it now. 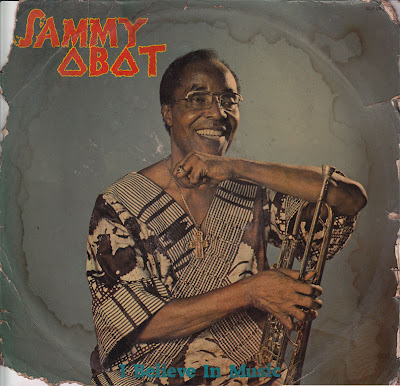 loving this blog! is it possible to get sammy obot doing the version of Don't Look Any Further? I'd love to hear it !!!

The song is already up there! It's "Mbon Sca Re"... Towards the end of the song, he interpolates the chorus from the Dennis Edwards record.

This is incredible! Is it just these three tracks?

The album has 6 tracks... I'll probably post the others later.